The Significance of X-rays in Medical Imaging – A Technical Overview 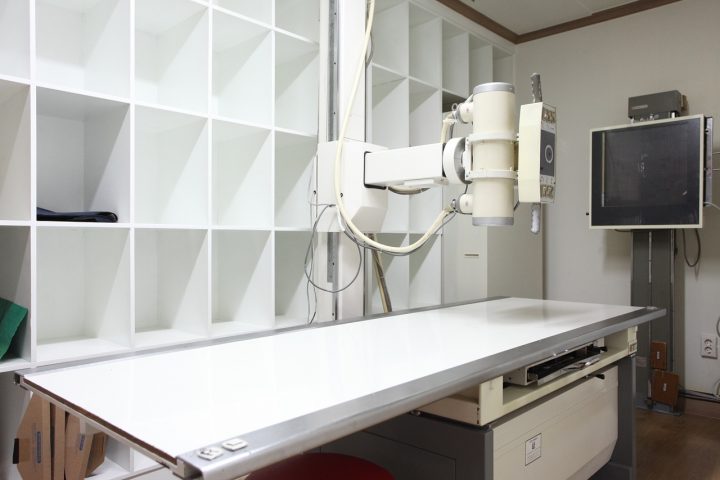 This article will elucidate how a typical x-ray imaging device works and what are the various uses of x-ray imaging in the healthcare domain. You will learn the following:

X-rays are a part of the electromagnetic spectrum that lies in the frequency range of 3×1016 to 3×1019 Hz and has a wavelength corresponding to the range of 0.01 to 10 nanometres.

X-rays can be generated by bombarding high energy electrons against a heavy metal, such as tungsten.

When a high energy electron approaches the oppositely charged nucleus of the metal atom, it is deflected with reduced energy and the lost energy is emitted in the form of an x-ray photon.

2. The Components of an X-ray Imaging Device

Every x-ray based imaging device requires a source of x-ray photons. An x-ray generator comprises a vacuum tube containing a filament (Cathode) that is heated to generate electrons that are then accelerated through the tube towards a tungsten anode.

The electrons are accelerated towards the anode by applying a potential difference (kVp) between the cathode and the anode. This kVp value can be controlled by the user to adjust the energy of the electrons, as per the desired image quality. The relation between applied kVp and image quality will be explained in later slides.

The number of electrons emanated by the filament can be varied by varying the current (mA) used for heating up the filament. This value is also user controlled and has an impact on image quality which will become clear in later slides.

B. Collimators and Filters

The x-ray beam generated by the x-ray tube is further filtered and shaped with the help of metal filters and collimators. These are attached mechanically over the glass window of the x-ray generator, through which the beam exits the tube.


A collimator is a device that helps to shape the x-ray beam and prevents scattering. Collimators are usually either square-shaped, comprising of two pairs of metal plates or circular, comprising of a metallic iris. Sometimes a combination of a square and a circular collimator may also be present.

The purpose of collimation is to ensure that the beam shape corresponds to that of the x-ray detector, which we will discuss in the next slide.

To maintain optimal contrast on the final x-ray image, the operator needs to ensure that the intensity of the x-rays falling on the soft tissue is lesser than that falling on the hard tissue.

This is important because if the same amount of x-ray falls on different tissue densities, then the soft tissue (like muscles) will allow most of the x-rays to pass through whereas the hard tissue (like bones) will absorb most of the x-rays. This will lead to anomalies in contrast that will render the image medically irrelevant.

The copper and aluminium metallic wedges act like filters that can be moved about by the operator so that they attenuate the amount of x-ray falling on the soft tissue. This helps in attaining the desired contrast by compensating for tissue density variations.

The difference between x-ray collimators and filters is that collimators are usually made of lead that blocks out x-rays completely from a particular region whereas the metallic filters are made of aluminium or copper that only attenuate the x-ray and do not block it out completely.

The collimated and filtered x-ray beam passes through the patient’s tissue and is captured at the other end by an x-ray detector. X-ray detectors can broadly be classified into two kinds- Film Based detectors and Electronic/Digital detectors.

The traditional x-ray films are made of photosensitive materials like silver halides. These films capture the x-rays that pass through the patient’s tissue, but need to be developed before the image can be viewed. Due to this requirement for post-processing, film based detectors are being fast replaced by digital detectors.

Digital Flat Panel Detectors consist of a scintillator plate made of materials such as Caesium Iodide that convert x-ray radiation into visible light. Different regions of the scintillator plate will generate different amounts of light photons, as per the x-ray intensity distribution. A layer of photodiodes then converts this light into electric current, thereby generating a matrix of electrical charges that represent the original distribution of x-ray intensity.

This matrix of charges is, therefore, a digital version of the x-ray image that is then stored and processed by a backend computer. The backend software unit can display and manipulate the image with the help of image processing software.

The accelerated electrons fall on a window of a material, such as zinc-cadmium sulphide, that converts the electrons into visible light photons. This final image is then captured by a camera and sent to the backend computer, as in the case of flat panel detectors.

This was a brief overview of the steps and components that go into the generation of a medical x-ray image. In the following slides, we will look at the factors that impact the x-ray image quality and the applications of x-ray imaging.