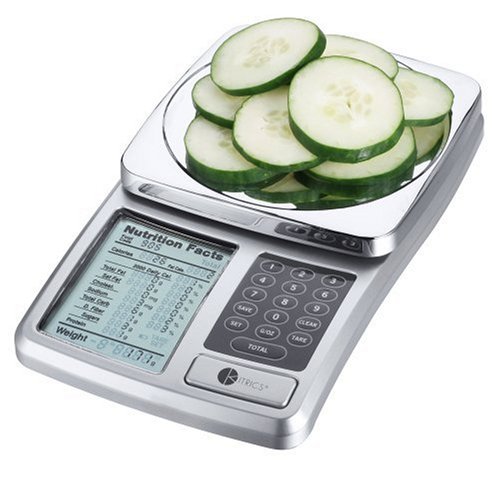 In this Teardown Tuesday, we are going to take a look at the inner workings of a small scale that is designed to track calories.

This scale features an LCD display that shows various nutritional information and a keypad that lets the user type in new foods and recall food that is already programmed in. The scale came with documentation for the 100s of food codes that were pre-programmed.

This was easy to open. Removal of four small and two large Phillips head screws allowed the halves of the housing to separate and the load cell assembly to pull apart. The circuit boards and display were removed with a few more small phillips screws

The top side of the main PCB

Inside of this scale, there are two circuit boards. The primary circuit board is a two-layer board with through-hole and surface mount components on a single side. There is green soldermask on both sides and white silkscreen on the component side. A few of the through-hole components are simply soldered onto surface-mount pads.

The bottom side of the main PCB

There is a second PCB in this scale with two push buttons. This is a single-sided PCB without silkscreen and with green soldermask on one side. The two buttons are wired in parallel. There are two wires attached to the board that are stress-relieved with hot-melt glue.

In addition to the two tactile buttons on the secondary PCB, there are 14 membrane dome switches to allow the user enter information about the food that is being placed on the scale. The membrane switch assembly connects to the main PCB with a flexible ribbon cable. This cable slides into a connector and relies on friction to hold it in place.

Located on the PCB are two ICs in die packages that are encapsulated in epoxy. Based on the trace layout, U1 controls the operation of the scale and U2 controls the interfacing to the LCD. The epoxy was sanded off of U2 to reveal the die inside.

The LCD driver in a die package

Sanding the epoxy is not the most gentle way to remove it. Many people have had success using various acids. In the sanding process, the the bond wires and die were damaged. The disconnected bond wires can be seen on four of the sides and the die can be see in the middle of the above image.

Two of the strain gauges

To let the user see the nutritional data that they are measuring, this scale features an LCD display. This display has text that is printed onto the glass and segments to display the values.

Connecting the LCD to the PCB is an elastomer (or zebra) connector. This connector is made from two silicone materials, one of which is impregnated with a conductor and the other is an insulator. This flexible conductor measures 2.5” wide, 0.1875” tall, and 0.079” thick.

There are a total of 52 connections from the LCD to the PCB. There are exposed pads on the PCB that measure 2mm by about 0.5mm and have an ENIG finish. All of these pads connect back to the LCD driver, U2, mentioned above.

The PCB contacts for the LCD

The date code on this PCB puts the layout date at about seven years ago. The construction of this scale is very similar to the other scale teardown we have done, the Bluetooth bathroom scale. At $40USD, there are other electronics that we have done teardowns for that offer a lot more tech-per-dollar.

Thanks for taking a look at this Teardown Tuesday! Stop by next week for another teardown!