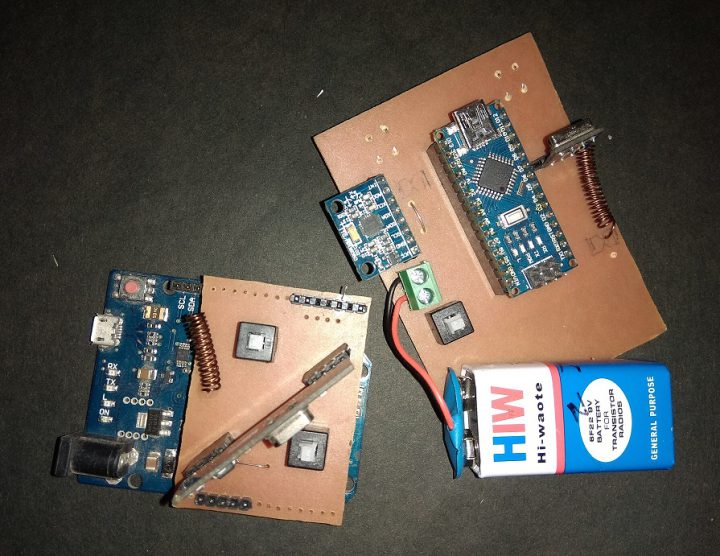 AIR Mouse is also called gesture-controlled mouse and it works based on hand gesture. In this project an accelerometer is used for measuring the tilt of hand in X and Y direction and moves the cursor according the tilt.

In the project two circuits are used, one is the transmitter circuit and other is the receiver Circuit.

If you are good in PCB Etching please use circuit provided below to build the project. 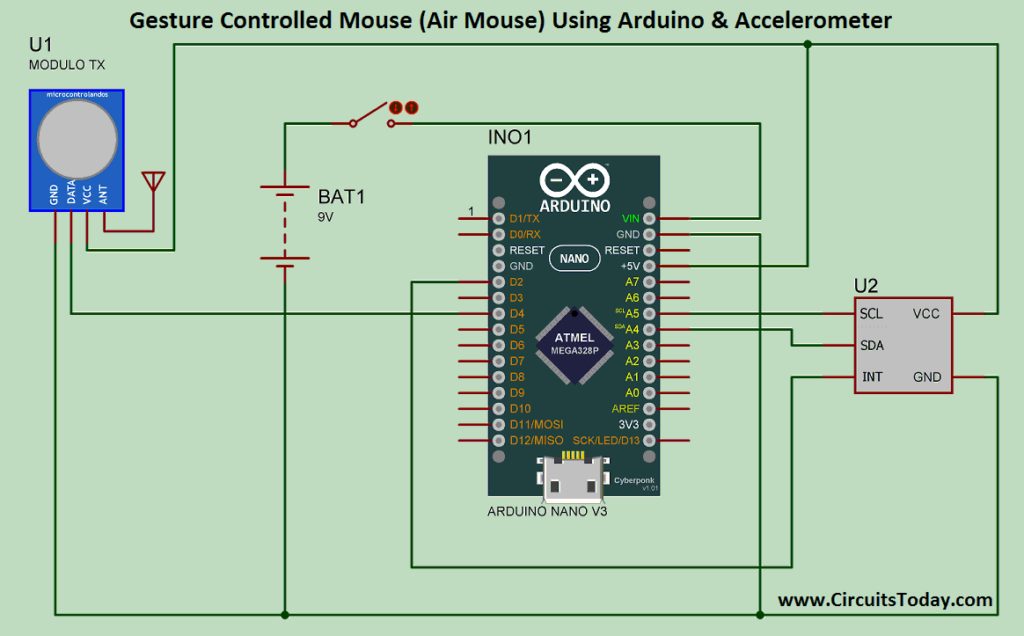 If you wish to build the circuit on universal PCB (ZERO PCB) or breadboard, use the design provided below.

In the receiver side, two major components used are the Arduino Leonardo and RF Receiver. Two switches are used for Enable/Disable the mouse and on/off the RF communication.

In the receiver circuit data pin of RF Receiver is connected to Interrupt pin (INT1) of Arduino, that is D2 pin.

A switch is used in the power line of RF Receiver, which is used for ON/OFF of the RF Receiver. Another switch is also connected to D4 pin of Arduino that is used to Enable/Disable the mouse. Arduino Leonardo is connected to PC through standard USB cable.

Circuit and PCB schematic are shown below. 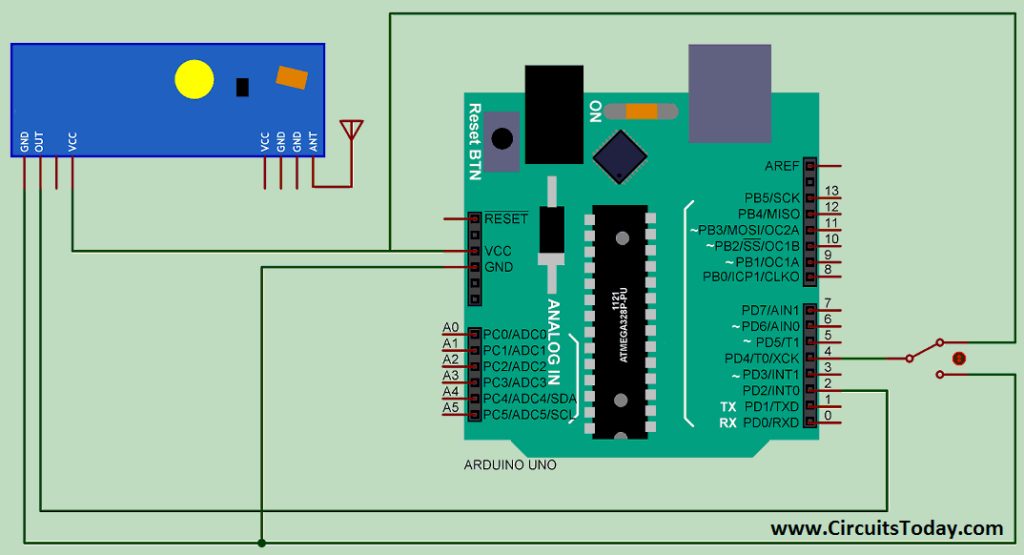 In the transmitter side an Arduino Nano is used as the controlling unit. The accelerometer is connected to Arduino through I2C communication that measures the gravitational acceleration in X, Y and Z direction, but we need only values in two axis so we are using values of X and Y. Two switches are also connected to Arduino; they are used for Left and Right click. Arduino measures all the values, now we have four values


All the values are merged into an integer of four digits, where each digit shows each value.

In the receiver side, Arduino receives the data (integer) from transmitter and breaks into four values. Arduino Leonardo supports HID (Human Interface Device) so it moves the cursor according to values of X and Y.

In this project two Arduino are used one is in transmitter side and other is in receiver side.

A “void cleckSetting()” is declared, it is used for checking the setting of “MPU6050”. This function is very long and complicated so we does not discuss this portion.

In the “void loop()” gravitational acceleration (normalized acceleration) is read from accelerometer. In line 72 and 73 values of X and Y is saved in integers that are processed values.

In the line 75 and line 76 status of left and Right Click is read and saved in integers. Now all the integers are merged in line 78 and saved in an integer and data is transmitted in line 80 over RF module.

At the staring of code two header files are used, first is used for the RF module and other (Mouse.h) is used for computer mouse.

In the line 4 “RCSwitch” is named as “mySwitch”. Some integers are declared in line 6 where “rvalue” is used for received data and “a”, “b”, “c” and “d” are the four values after breaking the “rvalue”. Two floats are also declared by name “xReading” and “yReading”.

In the “void setup()” “mySwitch.enableReceived” is used for enable the receiver. After it “mouse.begin” is used for starting the mouse. “pinMode“ is used for declaring the pin D5 as input.

In the “void loop()” an “if” condition is used, process come in loop when data is available over RF communication. Now received data is assigned in an integer “rvalue”. In line 23 to 26 received data (rvalue) is divided into four integers “a”, “b”, “c” and “d”. Where “c” and “d” are the value of acceleration in x and y direction, “a” and “b” are the status of left and right click.

From line 28 to line 44 values of “xReading” and “yReading” are declared according to values of “c” and “d”. In the line 46 RF communication is reset.