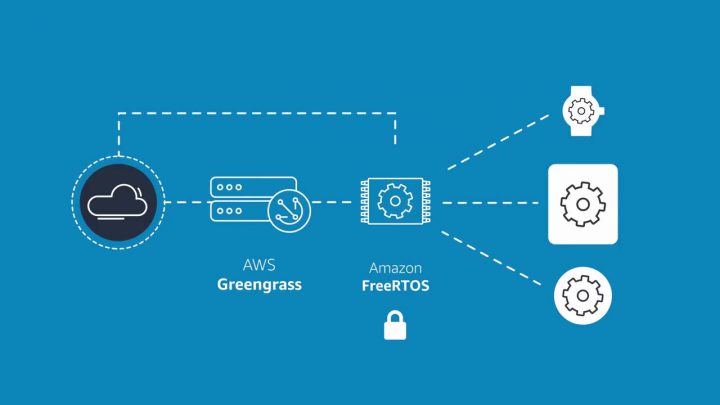 The support of large MCU suppliers shows that the undertaking from AWS to integrate connectivity into embedded OS software is a timely move.

Amazon Web Services (AWS) has built its own operating system for connecting low-power devices to the cloud. It can accomplish this either directly or through AWS Greengrass, which is software providing local compute services to the IoT edge devices.

Amazon FreeRTOS, as the name implies, is essentially an extension of the FreeRTOS embedded operating system with additional libraries for local networking and cloud connectivity.

Amazon calls it a “microcontroller operating system” that is built around the FreeRTOS kernel. FreeRTOS, an open-source operating system for embedded devices, was developed in 2003 by Richard Barry, who joined the AWS team in 2016. Subsequently, Barry contributed to the creation of Amazon FreeRTOS.

This is how Amazon FreeRTOS works to connect IoT devices to the cloud. Image courtesy of AWS. Click to enlarge.

Microcontrollers, which usually run a real-time operating system (RTOS) without the built-in functionality to connect to local networks or the cloud, can now utilize the rich connectivity features of AWS by employing the Amazon FreeRTOS.

For instance, in order to connect to the cloud, embedded developers have to rely on a collection of source files that transport clients like Transport Layer Security (TLS) for sending and receiving data from the cloud. What Amazon FreeRTOS has essentially done is integrate these connectivity resources into a single package.


So IoT developers can easily implement all the services that AWS platform offers for IoT environments. Consequently, as AWS chief Andy Jassy puts it, Amazon FreeRTOS allows designers to develop an IoT application without having to worry about scaling it to millions of devices.

Amazon unveiled the embedded OS software for microcontrollers at its re:Invent conference, and the launch was accompanied by announcements of support from the leading MCU suppliers and toolmakers.

A view of the Amazon FreeRTOS device software architecture. Image courtesy of AWS.

Then, there are toolchain suppliers such as IAR Systems and Percepio vowing support for this embedded OS software. That, according to AWS, will lead to the availability of a pre-integrated set of tools for developing and debugging connected applications.

Percepio has announced the support of its Tracealyzer runtime visualization tool for Amazon FreeRTOS. The company says that the Tracealyzer support will provide Amazon FreeRTOS users with the insight on how to execute IoT applications with fewer bugs.