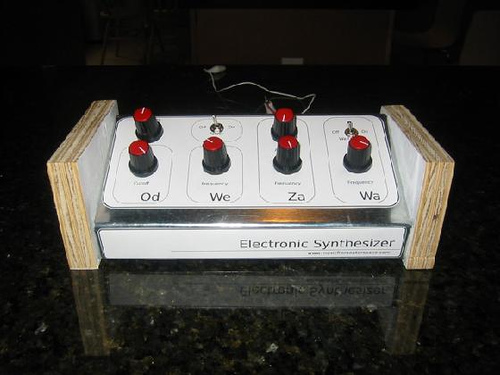 Shows how to build a simple project case out of hardware store materials. Particularly suitable for projects that need user controls or displays.
Step 1:

Sketch the project layout, sketch the console layout, taking into account the size of any controls needed, any plugs or ports, batteries, etc.
By looking at the number and type of controls you have planned for the project, make a rough sketch. You can make it pretty rough- I have included mine as an example. Note that you want to design it “flattened out” and plan to leave space for bottom attachment of the circuit board as well as a place to attach the bottom plate. Take note of the “tabs” going down the sides of the main box- they are how the final metal portion of the case will attach to the wooden sides, and they must be far enough apart not to interfere with one another when the case is bent.

Turn the layout into a prototype design.
Once you are satisfied with the basic layout, create a measured version to use as a component and console layout. You can use the examples I provided as a template for your own designs. I used the open source program “Inkscape” to produce my template- it is a nicely featured piece of software, using SVG as its file format. (see http://www.inkscape.org/) Pretty much anything that has measuring tools can be used to create the layout, or you can use regular drafting tools on paper, although it is a lot easier if you can make copies as you go.


The point to to make an “open bottom” box, which is folded from sheet metal on all four sides, but that still has an opening on the bottom for access to the PC board and components (including a battery, if desired) inside. The 4-sided box is then secured to the wooden sides with screws via a series of small tabs down the vertical sides.

A couple of useful tips- first, create the component layout in one layer, and place the console markings and layout in another layer. This makes it easier to make all the needed templates later in the process. The second tip is to use your component layout to make sure that the hidden portions of the console components do not interfere with one another. I measured the size of the potentiometers, for example, and then I made a measured circle to represent them in the layout, so that I knew how far they would extend and I could see how they were going to fit, and make and required changes.

Also, make sure that the drill holes are marked, and that they are the correct size. Clearly mark the centers of each, to simplify punching/drilling later. Also, another layer with text indicating the drill size to use is a nice feature- you can enable that layer when you print the component template.

Once you have made the template, print it or make a copy, and cut it out. By folding the paper into the rough shape you want, you can ensue that the layout is correct, and that the tabs do not interfere with one another when the box is assembled.