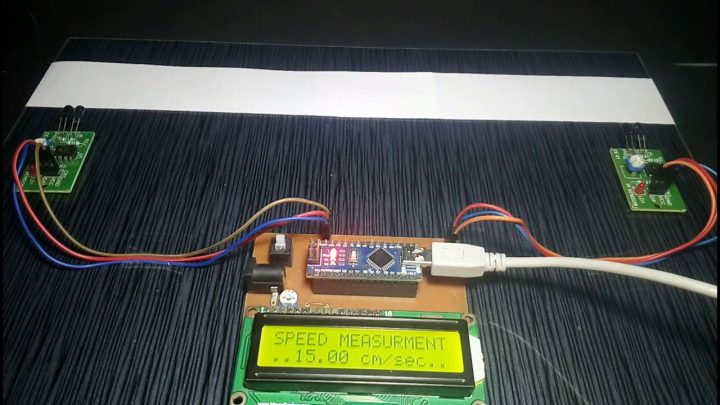 In this project, John from Circuits Today Blog is going to show you how to measure the speed of running a car (or man) from outside. The police department uses this type of system to prevent the speed of vehicles. This project is a little different from the system used by police but the overall car speed detector concept is the same.

In this project, two IR sensors are placed apart on one side of the road. When any vehicle crosses the sensors, the internal timer of Arduino counts the time between activation of the sensor. Now speed is measured by using a simple distance-time relationship.

Both IR sensors are connected to the interrupt pin of Arduino, and they detect the falling wave. The purpose of using interrupts is that it improves the efficiency of the system. An LCD is connected to Arduino and measured speed is shown on LCD.

Arduino Nano is used as the controlling unit, You may use any other Arduino variants according to your choice. 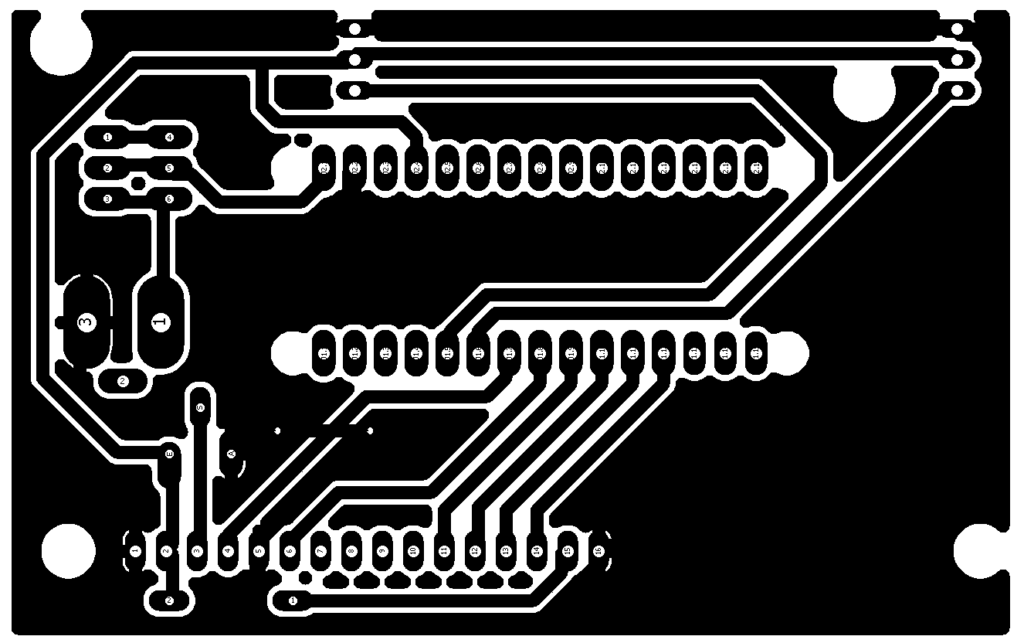 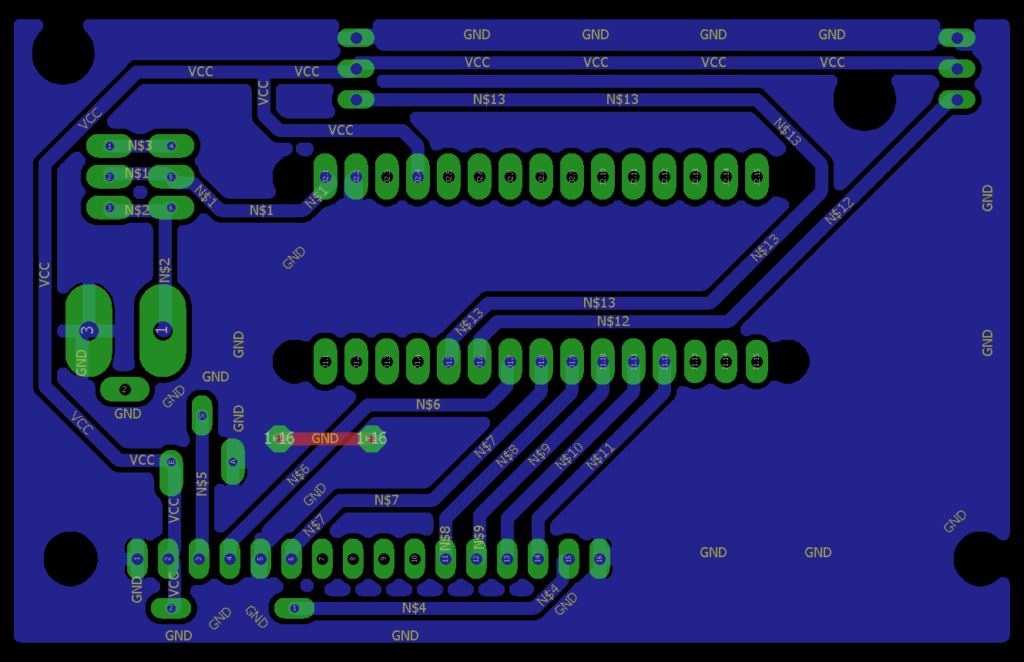 In the Arduino pins D2 and D3 are interrupt, where D2 is INT0 and D3 is INT1. Output pins of the IR sensors are connected to these pins. 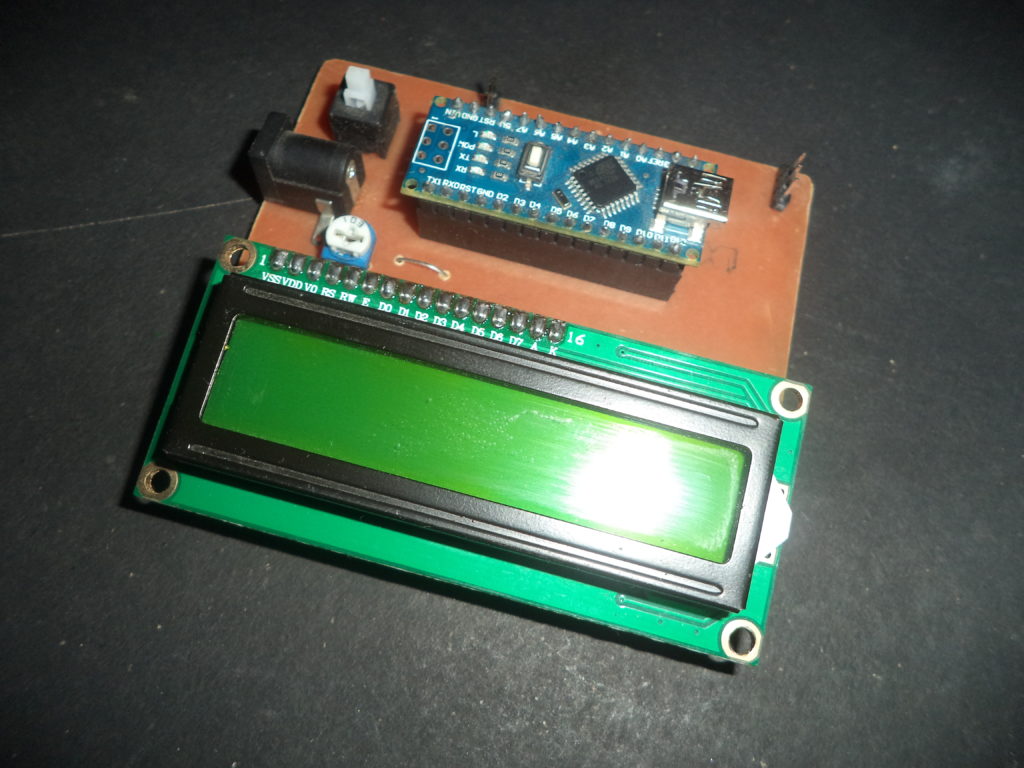 Circuit to measure the speed of a car

At the beginning of the code, a header file is declared by the name “LiquidCrystal.h”, which is used for the LCD display. In the next line pins of LCD are declared in the function “LiquidCrystal lcd(4,5,6,7,8,9)”, the number in the bracket shows the pins of Arduino that are connected to the LCD.

In line 4 and 5, two integers are declared by the name sensor1 and sensor2, these are pins of Arduino pins which are connected to IR sensors.

After it, 4 integers are declared by name Time1, Time2, Time, and flag. Where “Time1” is the measured time when “sensor1” is activated and “Time2” is the measured time when “senaor2” is activated. The integer Time is the difference of “Time1” and “Time2”, which is equivalent to the time taken by car to go from “sensor1” to “sensor2” or “sensor2” to “sensor1”

Now a float is declared by name “Speed” that is the measured speed of the running car.

At the starting of “void setup()” two interrupts are attached by function “attachInterrupt(0, fun1, Falling)” that means when “interrupt0 (INT0)” detect the falling wave, fun1 will run.

Now the LCD is begun by using “lcd.begin(16,2)” function. LCD is cleared by using the “lcd.clear()” function and “SPEED MEASUREMENT” is printed on the LCD by using the function “lcd.print”

In the “void loop()” first of all Time is measured by using “Time1” and “Time2”, the “Time” should be positive so “if else” is used for making it positive. But this loop runs when the flag equals to zero so an “if” condition is used. If “Time1” and “Time2” are equals “Speed” will be zero.

In line 47 a condition activated when speed equals to zero, at this time “….OK….” is printed on the second raw of LCD, that indicates the system is ready to use.

In the line, 51 speed is printed on LCD after printing “Time1” and “Time2” will become zero.

In the measurement of speed distance, time relationship is used. So the distance between sensors is very important, so we need to calibrate the system.

In the line an integer is declared by name distance that is equal to 27, this is the distance between both sensors. This distance can be varying according to your arrangement, so measure the distance in Centimeter and change here.