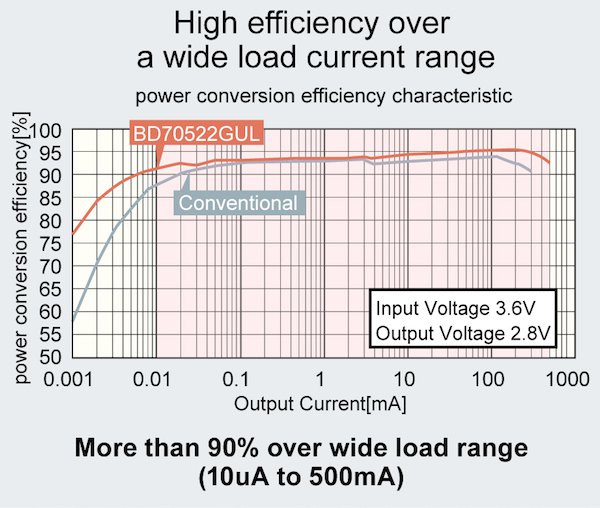 A new generation of DC-DC converters is lowering current consumption to unprecedented levels while aiming to offer greater design flexibility and space on the board.

The need for ultra-low-current consumption in portable designs is leading to the creation of a new generation of DC-DC converters that raise the bar on power conversion efficiency while lowering the current load to unprecedented levels.

First, the ultra-low-current consumption offered by these DC-DC converters creates design flexibility and board space for integrating new features. Second, it facilitates much longer battery life for the Internet of Things (IoT) and wearable applications.

These DC-DC converters are designed for applications that mostly remain in sleep mode and wake up periodically to perform a measurement or transmit data and then return to the sleep mode again. Here, DC-DC converters prolong the battery life and thus allow designers to select a smaller sized battery for their portable and wearable devices.

Take ROHM Semiconductor’s new DC-DC converter for instance, which comes integrated with a MOSFET and brings down power consumption to as low as 180 nA. The BD70522GUL chips claim power conversion efficiency of more than 90% across power loads ranging from 10 µA to 500 mA.

In its new DC-DC converters, ROHM has implemented its proprietary Nano Energy technology which, in turn, relies on control circuitry, an analog element layout optimized for the power supply design, and 0.35 µm BiCDMOS power processes. Then, there is the Seamless Switching Mode Control (SSMC) function, which automatically switches the load mode based on load current across a wide range.


ROHM claims that the BD70522GUL power chips can extend the battery life by 1.4x when operating in no-load or standby mode. The Japanese chipmaker is targeting its new DC-DC converters at compact battery-driven IoT devices like sensors nodes and industrial products such as alarms and electronic shelf labels. Check out How to Run from a Coin Cell for 10 Years for a demonstration.

From Buck to Boost

Next, there is new Buck-Boost DC/DC converter for wearable devices from Ricoh Electronic that consumes only 300 nA. That shows how the Japanese semiconductor firms are focusing on reviving the supply voltage design for the IoT era. Ricoh is targeting this DC/DC converter at the IoT and wireless modules requiring lower power consumption for extended battery life.

Ricoh’s RP604 power converter switches over from Buck to Boost mode automatically in order to maintain the output voltage setting. The DC/DC converter provides up to 300 mA in Buck mode, while in Boost mode, the output current is less and is related to the input voltage level.

The block diagram of the Buck-Boost DC/DC converter. Image courtesy of Ricoh Electronic.

The new power device from Ricoh comes integrated with multiple protection circuits. For a start, an under-voltage lock-out circuit disables the DC/DC converter in case the input voltage drops below a minimum threshold. Second, a soft-start circuit controls the output voltage to ramp up smoothly and thus prevents any output overshoot and undershoot during the start-up period.

Third, the Lx current limit circuit prevents the peak current through the inductor to exceed a specific maximum current threshold. Finally, an output overvoltage protection turns off both the P-channel and N-channel MOSFETs and thermal protection, shutting down the DC/DC converter in case the junction temperature increases above 140ºC.