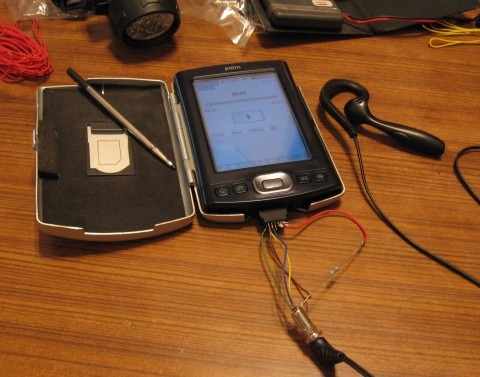 I added a 2.5 headphone/mic port to an Athena plug to create an adapter for a Nokia headset. So when they get VOIP for Palm workiang well, I’m in business. I have no doubt this would work just fine with the VOIP software; in principle it is exactly the setup I have used before, just a different form factor.
Incidentally, there was barely enough space to pull this off because of the type of port I used. There are smaller ports, but I liked the look of this one. I used a standard drill bit to enlarge the hole in the connector (twist by hand) and filed off the threads on the port on opposite sides to get a perfect tight fit. Visible in two of the pics is a 10k resistor to ground pin 10 (TXD) to pin 16 (AGND). What you can’t see is that a single wire connects pins 14 & 15 to the port, so yes, it is mono sound with both channels.

A bit of a problem was that the “power” part of the plug needed some glue on the inside to hold the pins from slipping into the plug when inserted into the TX. I could have left it the power plug section out, but it would have left a hole and having it there makes the fit of the plug tighter. It is a Gomadic brand plug.

Actually, all the wiring is done inside the Athena plug; you do not have to open the TX at all. There are a few threads here and over at Brighthand that discuss installing a mic in an Athena connector. This just uses the same wiring to a headset port instead. The only thing I am adding to the basic mic mod is to also wire the plug for sound out. And, yes, you guessed correctly; what looks like a hotsync button is just a molded mark on the plug case and does nothing.


The only thing I don’t know is how this would function on a device that already has an internal mic. I found that the “TXD” to “AGND” connection (pin 10 to 16) was necessary to cut off the internal speaker and get sound out of the connector instead. I don’t know if that would have any effect on an internal mic’s functioning or if both the internal mic and the headset mic would be picking up sound.

If VOIP becomes a reality for Palms, it might be worth making something just like this commercially. Hmm…, I wonder if Brando would be interested. He already sells the blank Athena connectors.

Oh, and one more thing I didn’t mention above. There are two clips of plastic on the Gomadic connectors that help hold the case shut. They are really easy to bend too far if you close the connector all the way and try to open it again. I haven’t had that trouble with other connectors with similar tabs that I’ve dismantled, but anyone who works with that particularly plug should be careful (or just buy a couple in case you mess one up). Fortunately there are two screws that really secure things well.