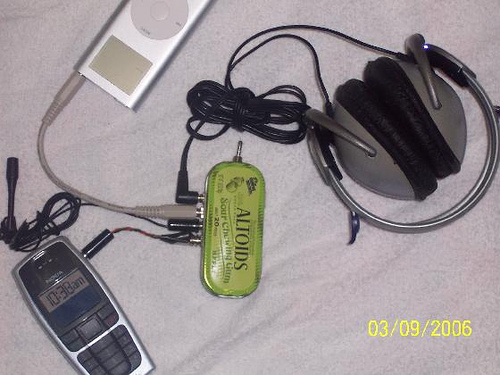 Assemble a switch box to switch from listening to music on head phones to listening to answering your phone with your left ear, while music continues in the right.

Step 1 Explanation:
Hokai, so I was getting tired of having to take off my head phones when having to take a call, and I was wishing I could listen to music while on hold or on a boring call.
So the idea was born and after a quick trip to my local electronics store, so was the final product.

Step 2 The diagram:
My apologies for the poor quality, but this crude diagram should be all the info you need to assemble this project. The bottom right is the mic line, this is where you plug in the microphone for your phone conversations.

Third from the bottom on the right is the auxilary plug. This is where your music comes in from. Basic 3.55mm female stereo jack. Top left is obviously where you plug in your headphones.

Step 3 Topology
I recommend setting the jacks and the switch in a cardboard model of the altoids tin (with just two sides) so that when you soldier the topology of jacks is maintained. My first version was in a regular sized altoids tin, and had the jacks facing up. This was easier to wire, but wasn’t as nice.


Suprisingly, this rats nest wasn’t too hard to soldier together, and held it’s shape once removed from the cardboard test housing. Just remember to PLAN AHEAD!

Step 4 Troubleshoot:
If you get music but can’t hear your phone or vice versa, doublecheck the connections on the diagram made in pencil (I noted them).

Also note that the mic doesn’t have an “off” switch. It’s always on, so if you’re on a call, being bored, and are tempted to switch back to the music in both ears, the mic will still send your voice over the phone! (read: try not to sing along…)

Also if you’re experiencing odd problems and have doublechecked your connections, make sure none of the soldier points are touching. And don’t forget to try to “jiggle” the connections to see check if the soldier is becoming lose.

Keep in mind that the plugs that will go into the jacks have girth, and may interfere with other plugs if you put the jacks too close together! (like me)

Step 5 Enjoy!
Flip the switch when your phone rings! (don’t forget to set the auto answer on hands-free mode unless you want to have to flip the switch and press the button to pick up the phone)
Enjoy your possibly boring phone conversations by supplimenting them with music!