Add Synchro record to your DVD recorder (without opening the case!) 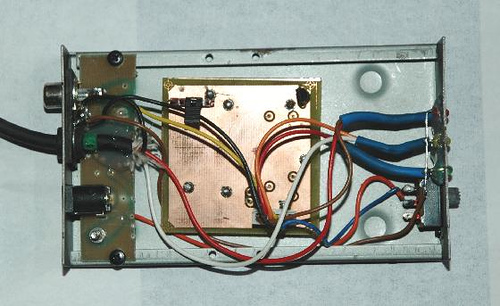 Allows Synchro record from a set-top box (mine is the Sony terrestrial digital reciever) to a DVD player which dosn’t have syncro record. You can then record programmes automatically by selecting them for record on the set top box with no need to programme the DVD recorder. You will not need to open either your set-top box or DVD recorder so no warantees or contracts are affected.

Step 1 The black box
The system comprises of a black box which connects between the Set-top box and DVD recorder using a piggy back SCART connector, an off the shelf plug-top power adaptor (from an old Black and Decker cordless drill charger) and a IR LED on a length of cable

Step 2 Inside the box
The box uses a motorolla MC68HC11E9 processor which I have salvaged from the bin (it has already had it’s EPROM programmed) running in bootstrap mode which allows code to run in the EEPROM. all it has then is an input from pin 8 of the set-top box SCART (12V indicated synchro recording in progress) and an input from pin8 of the DVD SCART (12V = dvd ON, 0v = dvd IN STANDBY).
There are two outputs, one drives the IR LED (scrounged from an old IR handset) via a suitable resistor (about 470ohm giving about 7.5mA trhough the LED) and annother output to flash a status LED on the front panel (just so you can see the thing is still working)


Step 3 Programming the code
Programming is done through the five pin connector on the PCB (the jumper between 2 pins indicates the code in the EPROM should be run, no jumper starts up in bootloader mode ready to be programmed)
To program the code in you will need a 5V supply to power the board during programming (the PSU used in normal operation is fine for this) a 12V supply for programming the EPROM and a serial connection to a PC, the RS232 levels on the programming interface are 5V so you will need a convertor with a LT1181 or similar to give true RS232 levels)

Step 4 Making the PCB
The PCB can be made from the images below, you will need to scale and print them onto acetate then expose them onto sensitised board.
Make sure that the artwork when printed is scaled correctly in BOTH directions.
Attach the components as shown in the image.
The DWF file has scaled printable versions of the PCB, schematic and layout. For a wiewer go to www.autodesk.com

Step 5 That’s it!
Here is an image of the box working