Add style to your HDD led with this simple circuit. 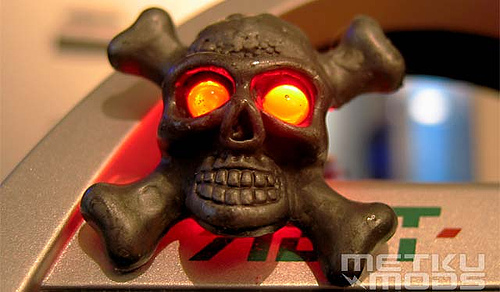 On/Off blinking Hard-Drive led can get quite annoying sometimes or it doesn’t seem to fit the overall theme of the case or a project. Why not make it smoothly fade in and out when there is some HDD activity? These following steps will show you how to do just that easily and with only small amount of money.
In short: We receive pulses from motherboard’s hdd led header. We get the pulses by removing the wire that goes to the original hdd led and replace it with our own wire that leads to our circuit. Optoisolator will charge the capacitor that is connected to the base of the in-built transistor. When the hdd activity gets faster, the ‘ACT’-led will start to shine more brightly because the charge inside the capacitor is getting higher. After this, when the activity dissapears, the capacitor will start to discharge via the base “leg” of the transistor and keep the led lit. When the charge of the capacitor goes slowly down, the led will get dimmer and dimmer and finally stop shining completely.

Was that short enough? 🙂 To get more out from the schematic I’ll explain it bit further. The two pins on the left of the image are the two wires that will get connected to the motherboard’s hdd led pin header. The polarity will matter because there is a led inside the optoisolator. There will be no harm on getting the polarity wrong the first time, just flip the connector over and the circuit will work correctly. 4N35 next to them is the optoisolator that will receive the pulses and charge the electrolytic capacitor that is connected between the ground and pin 6. of the chip. Be sure to check the polarity of the cap when connecting it. ‘ACT’-led and properly calculated current limiting resistor R1 gets connected in series between the positive supply voltage pin (in this case +5 pin from Molex connector) and the pin 5. on the 4N35 optoisolator. Pin 4. will then get connected to the ground to complete the path for the current.


That was the basic circtuit. As extra, I have added a ‘POWER’-led and R2 current limiting resistor parallel to all this. This will act only as a power indicator and the led will be lit when the computer setup is powered on. You can leave these two components off if you wish. On the far right are the actual connector pins for the +5 and ground from Molex connector. You don’t have to worry about them, as they are drawn only for PCB (printed circuit board) manufacturing purposes.