Lighting up your whole keyboard 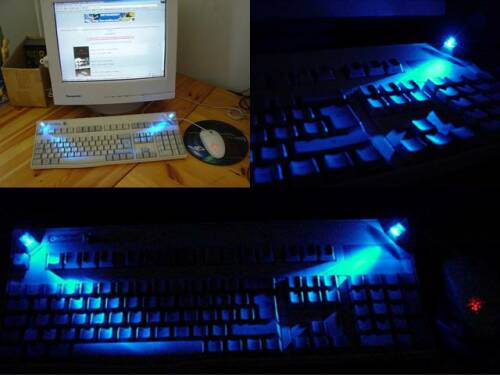 Open the lid, a few borrowed keys from another keyboard attached with some superglue(tm), solder the LEDs and the switch, and voilá. Heh, well, simplified, at least.
Okay, so I took two keys from another keyboard for the stands on which the LEDs will be installed. This way you’ll get the LEDs to illuminate a bit higher and therefore light up a larger area. The picture shows also the holes which are drilled for the feet of the LEDs, and another set for the switch.

The connection itself isn’t anything special. +5v voltage is dropped down to +3.8v which is suitable for the blue LEDs in question, and the current is set to 18mA. This is about half of the maximum current the LEDs can endure. Thusly, the LEDs aren’t that bright.


This article (as many others) is being written during midnight, the keyboard lit with the innovation in question, and I can find the keys even without the lights of the room. (Gah, who needs lights when you can write with your eyes closed, translator notes 🙂

And here we are with the semi-mandatory ArtZ image from the very bright and expensive LED. Hopefully the price of blue LEDs will drop to a reasonable level. These superbright ones are way too expensive.