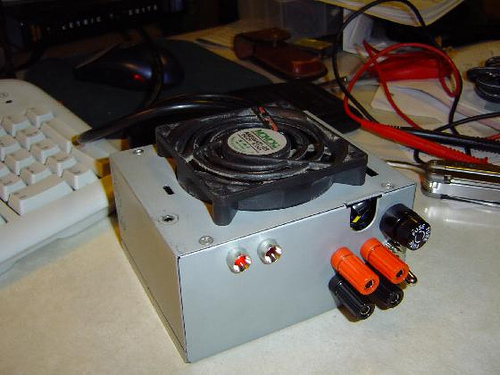 A good power supply for working on lab projects at home

Step 1 Planning
I created this image to plan out the project. I am going to use binding posts for the four voltages. A power switch, fuse holder, and two LED’s are also going to be used. The second image is what the power supply looks like without any modifications. You can see the various voltages I am going to use along the edge.

Step 2 Drilling holes
Here, I planned out and drilled the holes in the case. My power supply was a smaller form factor, (It was from a mini-tower case), so there wasn’t a lot of space to work with.


In an ATX power supply, there should be a wire that is used to turn on the power supply. You can see this wire (It’s green) in the second picture; it is the green wire in the middle, where it says “ON/OFF” on the PCB. I connected this to the switch, and the other pole of the switch went to ground. The +5, +12, and -12 are connected right to their wires on the PCB. The ground wire is connected through the fuse holder before the binding post.

Initially, I was going to use green LED’s, but I realized I had many more red LED’s than green LED’s, so I switched them over to reds. In the first picture, you can see the holders I installed into the front. I connected the LED’s through a common resistor to ground. The LED on the left (from the front view) is a standby LED. It is lit whenever I have the power supply plugged into the wall. It is connected to the +5V standby wire on the PCB. In my PS, it’s purple. The other LED is the “Power On” LED, and it is lit when I have the power supply turned on. It’s connected to the “Power OK” signal wire, which goes to +5V when the power supply detects that it has stabilized the voltages. In my PS, it’s the gray wire.

Step 4 Power Resistor
Most modern ATX power supplies require a small load to stay in the ON mode. I added a 10 ohm, 10 watt resistor between +5V and ground to provide this small load. It is strapped to the back wall of the power supply, where it should get plenty of air flow. It gets quite warm while running. I don’t have any wireties in my dorm room, so I had to tie the resistor to the wall with regular wire, but I plan to upgrade to wireties when I go home for holiday break.

Step 5 Finished Project
Here you can see the finished project, both with and without the cover. If you have any questions, please leave a comment and I will try to check back often to answer them. Thanks for looking, and good luck!