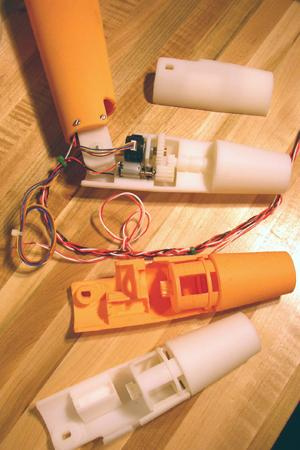 The following is Instructions for assembling the first generation robot arm that I am developing for the Eyebeam Atelier AiR program as part of an animatronic self-portrait. This arm has 4 degrees-of-freedom (DOF) from the wrist to the shoulder, runs at less than 20 W and is about 12 ounces.

Step 1 Motors and Encoders
I decided I would try to find separate shaft encoders and motors and try to make an assembly (or a couple varieties of assemblies) that would couple them via gear pairs or pulleys. We tried out a number of different motors and finally decided we would use a few gearmotors from solarbotics. We chose the solarbotics motors because they had a range of reductions, sizes, shaft output orientation and were overall very light, very cheap and very available. We are using the encoders to provide closed loop feedback for precision and obstacle sensing.

The GM3 224:1 gearmotor and the GM14 Sanyo 297.1:1 gearmotors have seen the most action so far in our arm assembly. The GM3 (and the GM2, GM8 and GM9) are all similar, use the RM3 DC brushed servo motor and have plastic gears and housing. They all also have an output D-through- shaft that can couple to an encoder shaft. The regular output shaft is also easy to couple to and the motor is pretty easy to mount with two built-in mounting through-holes. They are capable of 50 in*oz of torque, with a kludge clutch rated at 60 in*oz and a weight of 1.31ounces. They cost ~ $6.00 each.

The GM14 is smaller, lighter and has metal gears. This is a very small motor, small enough to universally make people say ?cute? when they see it. It produces ~40 in*oz of torque and weighs .29 ounces. The output shaft has a flatted side, so it is easy to mount to, though there isn?t much shaft axially in general. Not particularly easy to mount but it does have some mounting holes and can be mounted by putting the whole motor in a rectangular recess. They cost ~ $25.00.


I choose the U.S. Digital S4 miniature optical shaft encoder as the proprioceptive feedback device. This encoder is cheap, small, very accurate, comes in a number of resolutions, is easy to mount and can be purchased with a gear bearing shaft so the encoder can handle a substantial radial load. They cost ~ $45.00.

Step 2 Sizing
So with these motors in mind I started trying to build an arm starting with the assembly for the elbow of the james robot. I picked the elbow for no particular reason, but it turns out biomedical engineers also use the elbow diameter as a figure of merit for human factors engineering. It looks like the smallest I can make the elbow joint is ~2″ diameter. I could go smaller but it will actually cost more, as the gearmotors I would need are real cute and realy pricey. I decided to lock the size at ~52% scale to the 50 percentile man age 20-65 as documented by The Measurement of Man and Woman You can look at the overall arm dimensions in the Arm_Dimensions.xls in the Arm section of the DIY robot KIT.

The following design represents our first generation robotic arm. The current design has 3 DOF not including the wrist and up to the shoulder. This arm allows for motion approximating the motion of a human arm, including bending the elbow, forearm pronation/supination and gross supination/pronation.