How to turn your digital camera into an IR-camera 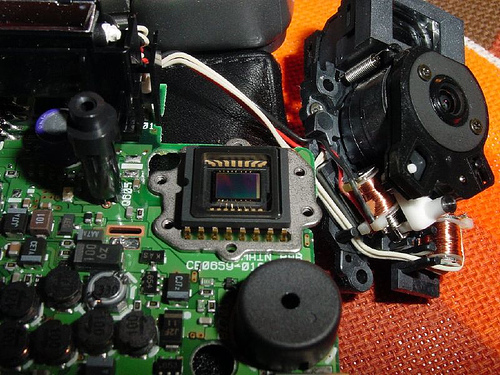 An extensive insight view of how I transferred my old digital camera (which would probably fetch only $30 on ebay or such) into a infrared camera. The whole idea is just that a lot of people probably have old cameras laying around, collecting dust, so why not make one of your old cameras an infrared one?
The camera… In my case a Fuji FinePix 1300. It’s a camera I always enjoyed using, a perfect point&click camera where you hardly could go wrong. But hey, it’s 2005 and 1.3 megapixel isn’t that impressive anymore 🙂
First look inside, you can see the display and the smartmedia-reader.

ADDED: a safety tip, tape of those two terminals (I put a blue circle around them on the above pic). These terminals are connected to a huge capacitor on the other side of the PCB and believe me, you don’t want that to discharge on you!


Warning Here is where I went wrong in the beginning, but well, you can also learn from other peoples mistakes, so that’s why I post these pics here. I went looking for an infrared-filter in the lens-assembly… which I took apart in the next picture… which in the end didn’t seem necessary…

Luckily I managed to get it back together, working and all… phew…The lens-assembly as a whole could come off and then you get a peek at the CCD and the reddish glow you see in this picture is actually from the infrared filter… I had to make a custom screwdriver to be able to get this tube, which normally holds the lens-assembly, off.