Dizzy – an aware kind of robot 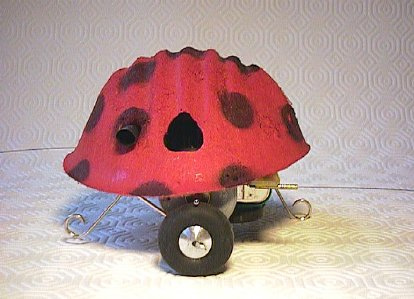 Dizzy has five different sensors, which are used to sense obstacles, battery voltage, charge, modulated infrared, light and darkness, motion around him and his own motion – he is my first small `bot which really always knows when he is stuck or being picked up.

Dizzy’s closest animal example might be the horseshoe crab (called `foil crab’ in Dutch). He appears to fence with obstacles in his path. If one of his foil-like feelers touches an obstacle, Dizzy retreats from it without reversing his motors, as is shown in this animation. (A bit of Javascript and images with a total weight of 90K).


Dizzy’s dining area is marked by an infrared beacon. When the `bot moves towards it, one of his castors will touch electrical ground in the shape of a piece of blank pcb material on the floor of his terrarium. Next to it (below the IR beacon) is a vertical contact zone. Dizzy completes the circuit by touching it with a feeler. Part of his real time multitasking `brain’ then acts as delta-V fast charger. As soon as his 140mAh NiMH battery is full, he will leave the dining area. He typically eats between 1 and 2 hours a day, divided over one to four meals.
The system is very reliable, partly because Dizzy’s motion causes all contacts to be cleaned often.

In the evening, when it gets dark, Dizzy falls asleep. He has to, because his main sensor depends on visible light. You’ll notice a soft ticking sound every four seconds. It’s his way of snoring a little. When the sun rises again, he’ll sleepily look around and may snooze another few minutes, or wake up for real. One morning my wife entered the room and told him it was time to rise and shine. He immediately turned around and talked back, but when she walked away, he fell asleep again. Her white shirt had reflected just enough light to wake him up, but only at close range…