Portable NES in a GameGear 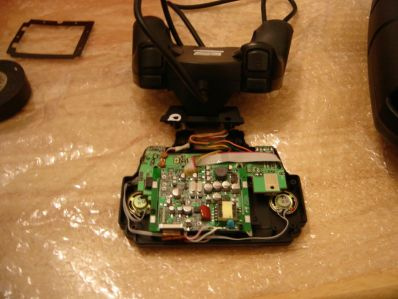 I recently became determined to make my own portable NES out of the MegaJoy (one of those knockoff Nintendo systems that can be found in malls) and the recently discontinued HIP Gear Screen pad. The Plan: Completely gut the GameGear and use it as casing for… the MegaGear – 76,000 NES games in 1

The Tools:
Soldering Iron
Multimeter
Wire Cutters
Electrical Tape
Assorted Screwdrivers
and its always good to have a rotary tool – for any necessary cutting.

Step One: Take everything apart. Pictured above is the HIP Gear controller, where my screen came from. Some of these components can be discarded, but carefully study the circuitry before cutting any wires. The circuit board located on top in the picture is the controller for the LCD screen, so be carefull not to damage it. Follow these same methods for the MegaJoy; disassemble the casing, study the circuitry, and salvage the needed components.


Step Two: I then began to solder the two components together. I connected the LCD (pictured on the left) to the MegaJoy processor and controller (pictured on the right). For the correct pin-out connections I followed Ladyada’s expert notes. The first thing I did was to test both the MegaJoy and the LCD together. I powered them with a 9V battery and crossed my fingers for some screen output.

Pictured above you can see the list of games on the screen, meaning that both the LCD and MegaJoy worked together. At this point, I released a HUGE sigh of relief, and continued to piece my gaming system together.

Step Three: Since my screen and processor work together, I then began to focus on connecting the controller. I took the original controller from the MegaJoy and cut it in half to fit the GameGear case. Once I had the pieces sized proportionally, I began the daunting task of soldering all the connections from the controller chip (cleverly disguised as a black glob of epoxy) to the MegaJoy processor as seen above. Again, if you wish to know the correct pin-outs, check Ladyada’s brilliant site.

Step Four: Once all of my components were connected together I placed it all inside the GameGear case and began screwing stuff down. Pictured above is what the inside of my MegaGear looked like. Notice the high class electrical tape that was used to temporarily hold the button panels in place. When everything has been screwed/taped in place, I tested the circuits again, and placed the other half of the GameGear case on.