Build your own LCD for your computer 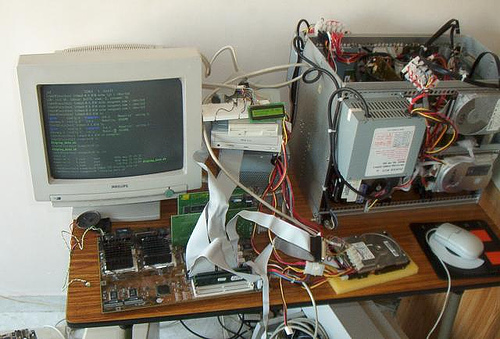 You want to have your own LCD to show anything you want on your computer, you could build, connect and interface it with your computer and forget about buying one.

At first when we at sorgonet.com began this project, we didn’t have any idea on how to control a LCD, what we were trying to do was connect someway the LCD to a battery and some LEDs and do the test and error technique to understant how did it work.

We need a LCD so we search for one, luckly we found an old credit card reader device, like the ones used on shops, just unscrewed it and remove the LCD (Liquid Cristal Display) the pins were very long so it was easy to connect to a board.


Searching on the net we found a that the chips our LCD have was HD4478 compatible, so it seems HD4478 it’s a standard an found lots of information about it, then we began to play with it with the switches, but we only could send the initialization sequence to obtain the cursor and send the A letter to it, it begins to repeat the letter because we didn’t use a clock to send it and it was done manually. It was a first step and learn a lot about HD4478 brain. Later on, we took an old printer cable and tried to do the same thing but using the computer to send the commands instead the manual switches, then we would be able to control timing.

It was a success we have some experience controlling the parallel port because our robot arm Sicario. We coded a simple rutine to send the rigth numbers to the LCD pins so, we were able to send the name “sorgonet.com” to the LCD.
It was time to program some kind of driver to controll it, but another search on the net show us that it have been done by someone else (Michael McLellan), so we just go to his website http://lcd-mod.sourceforge.net/ and follow the instruccions.

Note:
I suggest you to go to lcd-mod website and read all the information and the wiring schema if you plan to try it yourself.

The software is named: lcdmod and its a driver to controll the LCD from Linux, it creates a /dev/lcd device so you can send commands to it. It works very well and an example showing actual time is on the package.