Bluetooth stereo audio in the car 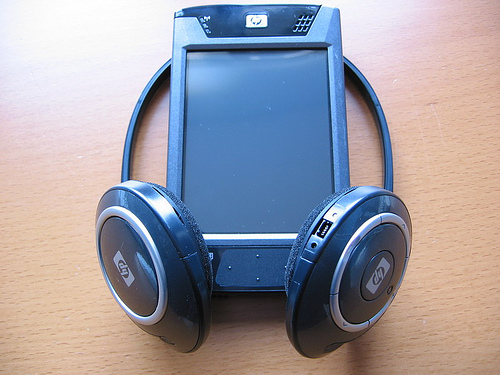 Every time a jump into my car I slide my companion into it’s cradle were it gets some juice and then I attach the 3.5mm plug for the audio. Fine – so far. But when I exit the car and pull out the iPAQ out of it’s cradle it has happened more then one that I forget the audio cable and either the cable will break (big deal..) or the headphones output will break.

Well this is problem that has to be solved and the solution is a Bluetooth audio receiver and can be bought for a price varying between $75-$150, but (there’s always a but) they’re (1) not designed for the car so they don’t accept a noisy 12v and (2) they don’t state that they work with my iPAQ. HP has set of wireless Bluetooth stereo headphones ( HP FA303A#AC3 ) and they have one drawback which makes this project happen. The headband snap! So tons and tons of people has gotten a new replacement set sent to them and HP hasn’t asked for the broken one back. The broken one usually ends up in a drawer or are rebuilt onto a regular set of headphones ( like Jonathan did ). You could of course also buy a new set just to take them apart and get your hands on the receiver, they’re right now sold for about $57 ( €49 ) including shipping at many places.


Frankly I’ve read that this headset works with a majority of smartphone running Pocket PC on them. The only thing you actually need to do is to manually get and install the Broadcom / Widcom Bluetooth audio stack and you should be able to use the HP Bluetooth headphones – or it’s dismantled alike.

Not that it matters but when I wanted to open up the headphones I just pulled the fabric out as there were no apparent other ways to open them up. This resulted in a nice tear in the fabric and I soon realized that inserting a screwdriver where the fabric turns inside was a better solution.