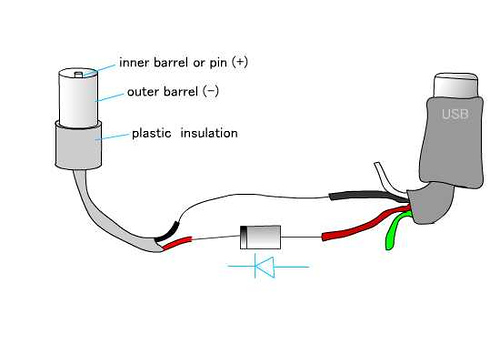 This simple project shows you how to make a USB powered Nokia cell phone charger. The advantage is that it weighs much less than the bulky AC adaptor, and can be used wherever you have a computer or a laptop. I use this thing all the time now!

What do I mean by “safe charger”? Honestly I’m not sure. I’m just going on what I was able to infer from what I read off my multimeter. What I found was that the voltage across the nokia charge pins was rapidly fluctuating from Vdd to about 4 volts above Vdd. It would not do to have ~9 volts injected into a 5 volt bus! Thankfully, all you need to do is stick a diode in there and that’s that. So the diode might not be needed, but it’s safe! Thus, “Safe Charger”.

So far, it charges my phone just fine, but slightly slower than the wall wart that came with it. I think so, anyway. It’s hard to do any real comparison because I sacrificed my only nokia wall wart to make this charger. I live dangerously!

DISCLAIMEROID STATEMENTEY THING: Ok, so here’s the deal: You can really mess things up with this project! If you are not COMPLETELY confident in your abilities, just go and spend the $6 on a ready-made one of these doodads. They are available all over the internet. This project is for people with loads of useless cables lying around and 20 extra minutes to kill. Don’t blow out your expensive computer just to save a few bucks!

Step one: strip off the shielding and insulation on an inch or so of the usb cable. Clip the white and green cables to uneven lengths so they can’t conduct into each other or either of the power lines. Hopefully you should be left with a black wire and a red wire.

Step three: Attach a normal silicon diode (not a zener diode) with the line part towards the nokia plug. It should go between the red wires from both cables (see image). Attach the black wires from each cable together.

I suggest staggering the lengths of the wires so that the solder joints have less chance of coming into contact.

Check all the wires with a multimeter to make sure they are really the right ones! The colors might not be standard…