How to add 20GB External Storage for PSP 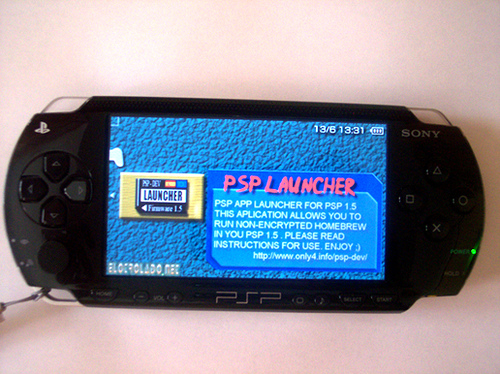 While I love my Playstation Portable as a both a game machine and portable media device, one of the biggest limiations is the fact you’re limited to the storage on the memory stick. Even with a 1GB stick, after you drop on a movie or two, you’re really limited in what you can store on it compared to an iPod.
About a year ago, I picked up an Asus WL-HDD drive enclosure (available from Newegg for $88). What’s cool about it is that it’s not only an external 2.5″ drive case, but also packs in a 100mb ethernet connection, 802.11g ethernet access point, and an additional USB port for external drives. This is in an extremely small (180mm*90mm*25mm) form factor that weighs only 200g – perfect for travelling or a small home NAS device. I ended up dropping in an old 20GB laptop drive just to play around with it.

For a while, I was really trying to figure out a way that I could use this to be an external storage device for the PSP, but it only allowed access to the files stored on the drives via Windows Networking (or Samba), which made it a non-starter. Additionally, there was no way to really ‘stream’ content to the PSP – if you hit a media file with the browser, it copied it down to the memory stick.


Everything changed though when Sony has relased firmware 2.6 which supports the streaming of music over an RSS feed (Note: Unfortunately, the PSP enclosure support currently only supports MP3/AAC music files via an RSS feed. Hopefully, they’ll update this to include video soon).