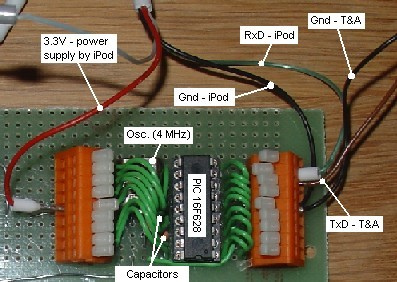 The project combines an Apple iPod with a T+A-hifi stereo system (R-system). The iPod can be plugged into the stereo system and does not only deliver the Audio-signal to the T+A-system but is also remote controllable with the T+A remotecontrol without an own infrared receiver.
The following iPods are supported: All iPods with dock connector (I just have a 3G-iPod, but somebody else told me that his iPod-photo works also), but no iPod Mini!

Somebody told me, that the serial protocol and the iPod dock is the same for nearly all ipods, this project should work with every ipod which got the “normal” dock connector (so no shuffle, no 1G or 2G). But this is not guarantied! iPod Photo and 3G have been already successfully connected to T+A-system.


The T+A hifi system connects its devices with a serial interface to transport the remote control signal. Since the iPod remotecontrol also uses a serial protocol, a translation seems to be possible. At this point I would like to thank Mr. Wiemann from T+A Electroacoustics who supported me by answering a lot of questions concerning the T+A remotecontrol interface (the protocol is online at http://www.taelektroakustik.de). Another big thank you goes to Christoph, who discovered the iPod accessory protocol (http://stud3.tuwien.ac.at/~e0026607/ipod_remote/ipod_ap.html). Without these two persons, this project could not have be concluded.

I don’t give guaranty on fault free functioning and the secureness of the described system. Everyone who uses this information does this on his own risk! I am not responsible for every kind of damage that can be caused to the involved devices.