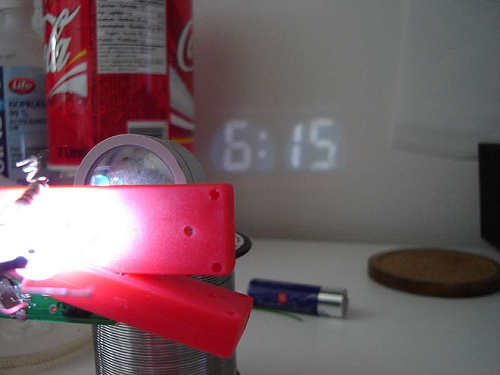 The first time I saw a projection clock (a friend had shown me his projection clock, which he used to project the time on his bedroom ceiling), I knew I could easily build my own by converting a watch with an LCD display. I bought a very very ugly watch in a dollar store. So ugly that it really is unwatchable) At least it’s easy to disassemble.
Disassembling the watch:

To remove the pcb, just remove the screws. The LCD is mounted over the PCB. A conductive rubber bands holds the pcb in place and conducts electricity between the LCD and the PCB. Just pull on the LCD and it will come off easily.

The LCD is not usable as-is. To be usable, (1) light has to be able to pass through it and (2) the display has to be black on white (transparent on opaque).
Remove the reflecting background sticker to let the light pass through the LCD.

To get a transparent-on-opaque display, reverse the polarizing filter located on the LCD front side:

In order to prevent the PCB from blocking the light, I extended the contacts on the PCB with small pieces of wire. A sufficient pressure must be applied to obtain a good contact between the wires and the conductive rubber band. Otherwise, some segments may not work correctly.

In order to be able to set the time easily, I installed two buttons on a small PCB. Next, I connected the wires on the watch PCB where the original buttons used to be.