Building a megapixel digital camera from a flatbed scanner 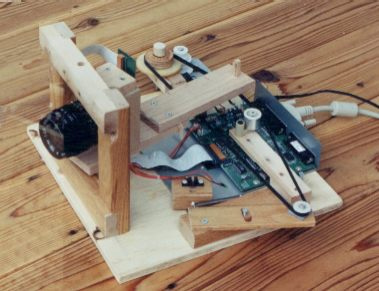 I started playing around with my flatbed scanner to see if I could capture images of stuff around it, by holding the scanner in my hand and rotating it as it scanned. This allowed the focusing lens in the scanner to pick up some of the light from the surroundings.
My approach basically involves trashing a $100 scanner. I disassembled the scanner and took out all the electronics, the CCD image sensor, and the stepper motor mechanism, and built a new mechanism to hold it all together, and rotate the CCD and lens assembly to scan its environment, instead of a piece of paper.

For the lens, I used an obsolete 35mm F/2.8 screwmount SLR camera lens. The lens is so obsolete, its even predates the Pentax screwmount (which I still use). The lens has no anti reflective coating, and, a completely manual aperture – that is, it even predates the automatic aperture reduction when the shutter is released. Its entirely manual. Perfect for the job.

I mounted it to the CCD by cutting a slot in a block of wood. On the back side, I mounted the scanner’s PCB with the linear CCD. On the front side, I mounted a lens cap (with a hole cut in it) to the wood, and screwed the lens into that. Surprisingly, from my rough calculations, I got the lens within .002″ of the right distance from the CCD for the focusing scale to be correct. Careful sanding corrected the rest of the error.


The lens and CCD assembly is rotated on two metal points, which poke into small holes in the the wooden frame from the top and bottom. The points are just the tips of screws, which are of course easily adjusted.

This method of scanning does cause the perspective to be more ‘cylindrical’ than rectilinear, but for most shots, it’s either not noticeable, or not bothersome. To get rectilinear perspective, I would have to move the CCD in a straight path while leaving the lens fixed in position, and that wouldn’t be easy to do with simple means.