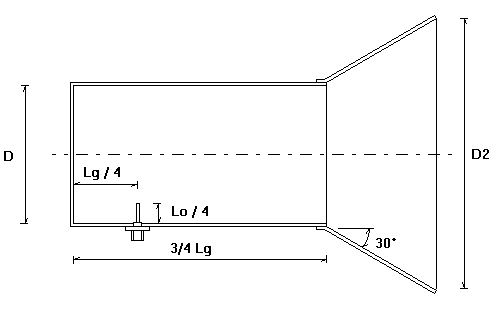 The antenna is constucted only of a cylindrical can and a N connector with centre tap lengthened. Just point the open end of the can to the ISP station and begin surfing. Oh, of cource there is needed some cable between the antenna and wlan card.
There are three different wavelengths in the waveguide tube. Here they are marked as Lo, Lc and Lg.

A waveguide which is closed on the other end acts similar as a short circuited coaxial cable. The coming hf signal reflects from ending point and there forms so called standing wave when incoming and reflecting signals in different places are either weakening or amplifiering each others:

If there is a measuring probe which is moving in axial direction inside the tube there can be found some minimum and maximum points in certain intervals. At the closed end the signal is zero and so will be in halfwave intervals. The first maximum point is quarterwavelength from the closed end. This will be the best place to outlet signal to coaxial line. You can notice that maximum area is quite flat. So the place of the outlet must not be very accurate.

It is important to notice that the standing wavelength Lg is not the same as wavelength Lo counted from hf signal. Large tubes are near as open air where Lg and Lo are almost same but when tube diameter becomes smaller the Lg increases effective until there becomes a point when Lg becomes infinite. It corresponds the diameter when hf signal doesn’t come to the tube at all. So the waveguide tube acts as a high pass filter which limit wavelength Lc = 1.706 x D. Lo can be calculated from nominal frequency: Lo/mm = 300/(f/GHz). Inverse values of Lo, Lc and Lg forms a right angled triangle where becomes the equation of Pythagoras:

which can be solved