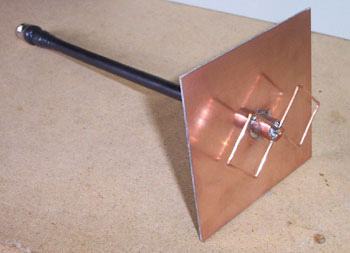 The biquad antenna is easy to build, and provides a reliable 11dBi gain, with a fairly wide beamwidth. Some very rough initial testing using the biquad as a feed on a 24dBi Conifer dish looks very promising. I also managed to get a marginal link to a 180 degree waveguide on an access point 10km away, using only the biquad by itself, connected to a 30mW RoamAbout wireless card.
When using a biquad to establish a link to another wireless device, you should ensure the polarisation of the biquad is the same as the antenna you are connecting to. Similarily, if establishing a link with two biquads, ensure they are both oriented for the same polarisation. Failing to match the polarisation will result in significant signal loss.

Changing the polarisation is just a matter of rotating the entire biquad antenna by 90 degrees.

The biquad antenna is not particularly directional, but has a fairly wide beamwidth. The 3dB beamwidth for a biquad (without side lips) is typically about 40-50 degrees, thus making it ideal for any applications where you want fairly wide coverage.


The relatively wide beamwidth also makes a biquad very suitable for war-driving and stumbling, allowing you to pick up signals without having to align the antenna directly with the signal source.