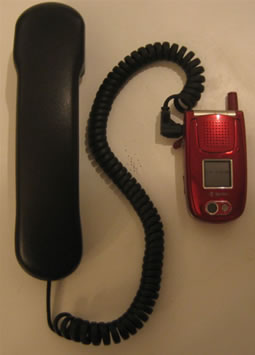 Getting the right handset is crucial to this build. The lucky thing is, the right handset means the right one for YOU. I will explore three different models of handsets, two that will work, and one that will not. Before you start, you need to take a look at your cell phone and identify how you would connect a headset to it.
The handsets that I will be referring to came off of these types of phones: Nortel Networks M3904 (think your typical modern office phone), a 1964 Western Electric Model 500 (think your typical old rotary telephone), and a Southwestern Bell Freedom phone with CallerID on the handset. Now I chose these specific phones because that is what I had access to. This is by no means a complete list of the handsets that will work with this project. Basically you are after a handset that is JUST a handset (as in, not a phone itself) and one that you like.

Lets start out by discussing the Nortel Networks phone. This is just your standard modern office telephone. I chose it because it was easily accessible, and fit in my hand well. The benefit of using a modern phone, is that the handset will have a RJ-11 jack allowing you to disconnect the phone cord. You will see later that the older phones do not have this luxury. Along with the Registered Jack (trivia time) the newer phones use standard colored wires. We will be focusing our build on newer phones as the wires should be the same colors, and much more easily accessible.


Ok, so we saw our standard office phone, but what About the Western Electric Model 500? The oldschool phreak in me doesn’t want to walk around with a brand new Nortel handset.. He likes the Model 500. Besides, who wants to feel like they are at work all the time? That is what I thought. The problem is, not everyone has a Western Electric Model 500 laying around that they want to destroy.