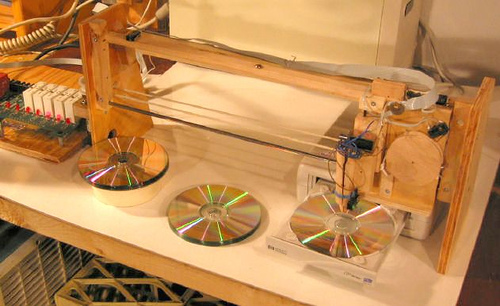 The machine is essentially a robot that allows sequencing thru a batch of disks unattended. It is very useful for batch processing CDs – such as batch burning my large digital photo archive, as well as batch reading it back in, or batch ripping of CDs. Its not random access – just has an input and an output stack.
My first thought was to come up with something extremely simple, with no electronics. Ideally, the motion of the cd tray would trip some sort of mechanism that would eject the CD from the tray and insert the next one. After months of thinking, I still hadn’t thought of a mechanism that had a hope of actually working.

The next idea was to pick up the CD, but how to pick it up? Vacuum came to mind, but that would get complicated, vacuum pump, solenoid valves, and all. Finally I decided to just pick up the CD by the hole, with an expanding finger, shown at right. The finger’s end consists of a cone that inserts in the CD hold up to the shoulder. The whole finger is cut in half, and pivoted. The pivot is just to the right of the blue rubber band. Its a nail, which rests in a grove in either half. The rubber band is the only thing holding it together. The solenoid on the right pulls the pieces together on the back, which spreads the front of the finger, and holds the CD by friction fit. The shape of the cone is a bit tricky. It has to be made in such a way that it will hold one CD securely, but never a second.


the next challenge was moving the head around. It has to go up and down, as well as side to side. Stepper motors come to mind, but they do require a fair bit of electronics to drive, with 4 separate coils that need to be switched. Plus they need very precise timing, and still need some sort of “home” switch. Thinking about this a bit, I realized that plain old DC motors with a few micro switches for sensing key positions would be sufficient. The horizontal travel only needs to stop in three positions. The vertical travel only needs to go all the way in either direction. By making down travel gravity based, I didn’t have to worry about mashing the stack of CDs or the tray with excessive down travel.