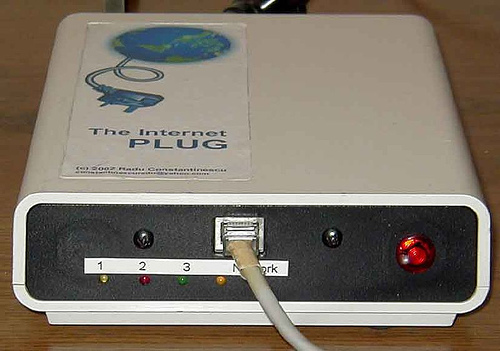 The Internet Plug is a web-enabled appliance. The main goal is to show a simple and effective application for home use. The concept is extremely simple. An interface between the cyber world and the real world. A box connected to both of these worlds accomplishes this. One of the simplest applications will be to control the lights from the distance, meaning from any computer connected to the Internet.
The Internet Plug tries to show a concept of the future: the web-enabled house.

The implementation is as simple as the concept, a plastic box with a 3 Power outlets and a computer network connection. The three outlets are for general use, any device can be connected, a lamp, a radio, a TV or any other electrical appliance. On the network connection a simple computer or the Internet can be attached. The Box does the rest, actually the box contain a web server and the power command elements necessary to turn on and off the power to the three sockets.


Some time ago I use to create an “Internet Plug” – it was useful except one aspect – no password protection was available for the Site Player. In order to solve this problem I have attached a 16F877 processor to the Site Player. Now the Internet Plug is Password Protected and also the status of the exits is saved in EEPROM so is not lost in case of a power failure. The new project uses the same hardware as the old one.