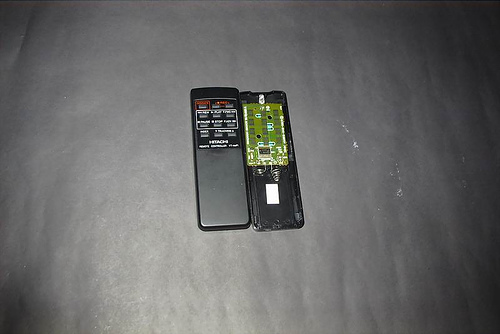 I decided to build a plain simple Winamp IR Controller to control Winamp’s basic systems i.e. Volume, Play, Stop, Pause, and etc. and I began to build it by firstly replacing the original circuit board with the one of my own. The board contains a PIC16F628, a 74LS32 OR Gate, a 2N3906 PNP transistors, a 78L05 regulator, 4 MHz crystal and an IR LED together with some push buttons.
Due to the limited amount of space most of the wirings are done at the reverse side of the board….yes a crazy hell of a messy wiring.

The new circuit board is the fitted into the old Hitachi VCR Remote Control casing, and quite surprisingly, it was almost a perfect fitting. I had to saw off the edges inside the casing abit to make alittle more space for the buttons.


The IR Receiver module is connected to the Serial Port of the computer. It intercepts the signal transmitter from the IR Controller and translates it to Winamp Commands. Winamp has a Global Hotkey listing which can be used from anywhere in Windows to control Winamp. The Visual Basic programme basically generates these keyboard scancodes to access the Winamp Global Hotkeys.

Before the IR Receiver can be used to control Winamp, the Global Hotkeys need to be enabled first.