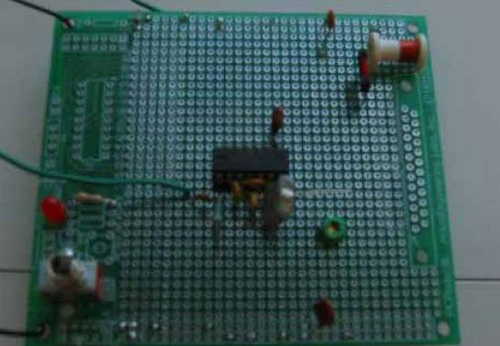 The report focuses on how low powered, low frequency RFID reader is able to detect and identify the RF Tag at a greater distance with the assistance of the RF power system.
The reading range of a 13.56 MHz is RFID system is around 3cm with passive tags. In order to increase the distance to a more usable range, an amplification system needs to be built. The chosen system is a wireless power transfer system. The system is designed to transmit an amplified sine wave at 13.56 MHz to the transponder. This will theoretically allow the transponder have enough available energy to sends its coded information a distance farther than 3 cm. The power that is transmitted is a generic signal that places the transponder in an amplified standby state. When the transceiver sends its information to the transponder it turns on and transmits the bits programmed into it. It has the power of the both the generic signal and the transceivers.


In order to give the transponder a useable system, the correct frequency needs to be generated. An oscillator circuit was built and produced a frequency at 13.57 MHz. The oscillator uses a crystal with a frequency of 13.48MHz which was tuned using inductors and capacitors. The Peak to Peak voltage produced was 688 mV with a 5V power supply. Figure 3 shows the schematic for the oscillator, it should be known that the two op-amps represent the LM373 IC which was not available in the PSPICE catalog of parts.