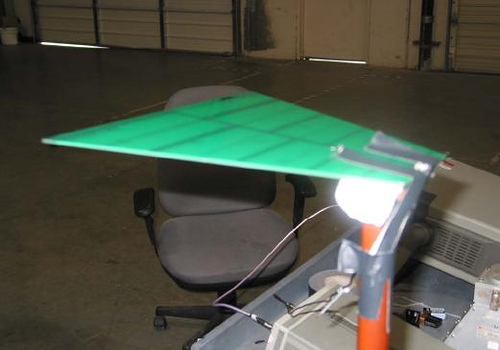 
As a user walks out onto the parking lot, the vehicle could be positioned in any arbitrary location with respect to the user. The user then takes out the device and starts to sweep it in an arc as previously discussed. The user would stand at a fixed distance from the car. The omni-directional antenna would receive the signal and the RSSI chip would output a voltage with respect to that distance. If the user is pointing the unit in a direction not aligned with the car, the output of the RSSI chip from the directional antenna would be less than the output of the RSSI chip from the omni-directional antenna. The difference of these two voltages would be taken and compared to a set threshold. If that voltage is not smaller than the set threshold, the LED will remain off. As the user sweeps the unit in the arc, and as the directional antenna is eventually pointed in the right direction, the output of the two RSSI chips would be very similar. The difference again is taken, and compared to the threshold. At this point, the difference would be smaller than the threshold voltage, and the LED circuit will turn on. Thus the user is able to identify the direction of his or her car.