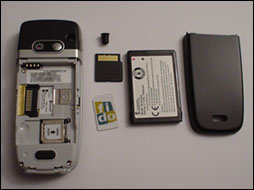 This C500 windows mobile phone attracts dust very quickly. Here is a method that you can follow yourself to disassemble the phone and blow-out dust and other particles from your phone without making any damage to it.
Materials you need:


2. Take the small Phillips screwdriver and put it through the small rectangular opening located above the battery compartment on the right side and push the small black tab inside the opening while pushing up on the top cover until the cover pops up a little, then do the same to the opening on the left side. Note: I used a S1.5 slotted screwdriver.

3. When both sides of the top cover are released, push the cover up a little and then push it forward to slide off the top cover. Note: There are two tabs at the top of the cover as well, do not force it off.

4. Unscrew all 6 screws with the T5/T6 Torx screwdriver. Please note that there is a screw under the VOID sticker also.

5. Used an old credit card or any plastic card to slide along the side and top seam between the front and back housing. Once the top and the sides of the cover is released pull the back housing up a little and push the back housing downwards to fully release the cover and to clear the Mini USB and headphone plug.