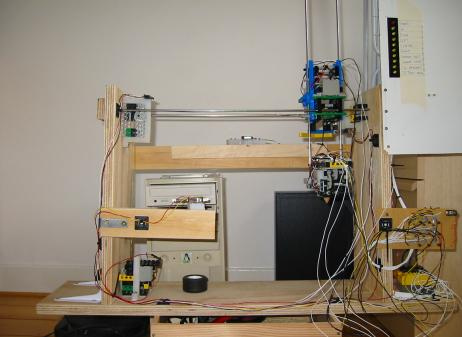 I was faced with the task of ripping c300 CDs, and of course instead of just doing a handful every evening and eventually getting through it, decided to build a robot out of the Lego Mindstorms set which my wife and I received as a wedding present. This is the result.
Not all of it is built of Lego® components: the frame is 18mm plywood (left over from something or other), and the two sets of rails are 4mm stainless steel rods. There’s also a good number of pieces cut from plastic chopping board, and some mahogony for the part which actually picks up the CDs. But all the interesting stuff is done with Lego® parts: the carriage which moves from side to side, and the head which moves up and down. The RCX brick controls it all, too, with a bit of help from an input multiplexer. I didn’t have to mutilate any Lego® bricks, with the exception of buying some extra connection cables (from Bricklink) and chopping them in half to make connections to/from my circuits and switches.

The robot has two movement axes — left/right and up/down — and a third motor controls the grip/release of the CDs. The whole physical design is very similar to a CD-changing robot created by Matthias Wandel, but with a few differences here and there. No point reinventing the wheel, after all.


These pictures are taken from the other direction compared to the main picture at the top of the page, to get a clearer view of some of the parts.

There’s enough tension on the picture wire that the rubber wheel grips it and pulls the carriage left and right when it turns, and the same limit-switch arrangement as for the other two degrees of freedom (see below) stops the carriage trying to go through the ends of the frame. Four jigsawed bits of chopping board hold the pulleys and drive wheel to the frame.

In common with all the other parts of the robot, it doesn’t move very quickly. It takes about one minute to completely travel from one end of the rails to the other.