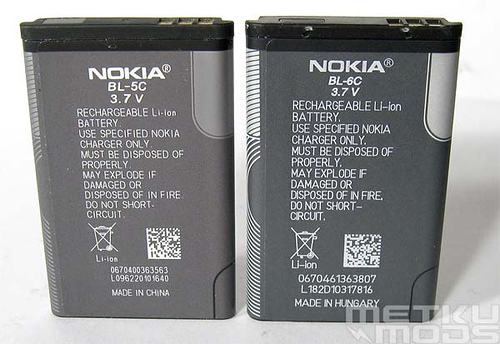 Nokia 6600 uses the BL-5C battery out from the box. As 6600 is not just a phone but can run symbian software, it tends to drain the battery relatively fast. Here is how you can use BL-6C battery with capacity of 1070 mAh to give a nice real life performance boost to operation time.
BL-5C has capacity of 850 mAh. I was getting it to run around 3-4 days before it would start to let me know that I should recharge the batteries.

3-4 days is a quite good total for many users but my Sony Ericsson P800 was getting me close to a week so I decided to see if there was something that I could do to improve the battery life. I came to conclusion that I had two choices. Either stop playing games and testing software on the phone or replace the battery with something more powerfull. I chose the latter option and decided to look for replacement.

As Nokia doesn’t officially support other than BL-5C in their 6600 mobile phone, I had to look for alternatives from their other models. I found out that the new N-Gage QD uses almost identical battery in terms of size; BL-6C. It also offered battery capacity of 1070 mAh with only 4 gram weight increase so I got interested about it. 26% increase in milliampere hours should give a nice real life performance boost to operation time.


As you can see from the package the battery is meant for Nokia N-Gage QD. Don’t let it stop you as we are going to see if one could fit this unit inside a 6600. BL-6C was quite hard to track down as I found out that there are not that many stores here in Finland selling this battery. It was not listed in many of the official Nokia partlists that retail stores had. You can find this battery on the web quite easily and the prices start from around 10 euros on eBay and around 20 euros on retail stores.

So the batteries are compatible in terms of voltage. Dimensions are more or less the same, major difference being the thickness of the battery.

Measured from the middle of the battery the BL-5C is 5,3 mm thick. BL-6C is 6,25 mm. While this difference may sound small it is still much when you think about the overall size of the mobile phones these days. That is why you have to prepare to mod both your phone and the battery a bit.