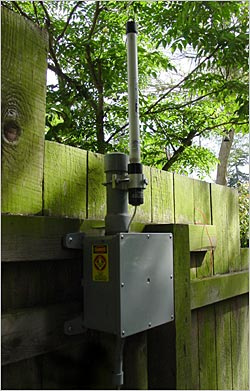 This project gives you some ideas as how to easily setup an access point outside your home. Maybe you have a park across the way that you’d love to work at, but can not because you need to be connected. This project can surely make it possible.
The Parts List:


You’ll need to find an enclosure that will fit your access point. Most of the time, the case is bigger than the actual electronics inside… so if you are having trouble finding a case, you can always dismantle the access point/repeater, however, this will void your warranty. For my WAP11, I took some measurements and headed to my local Home Depot. I found they had a 10”x10”x4” PVC box that looked perfect for this project.

I wanted the status LEDs to show thru the bottom of the enclosure so I had to remove the front of the WAP11. The photos above show how I did this. I took the front part and stacked it on the back of the WAP11. This gave me some support and the height was perfectly in the middle. I marked and drilled the 3 LED holes. I filled them up with clear silicon so the LED lights could still shine thru. I also attached some double-sided foam tape so I could secure it in the enclosure.

My first attempt was to have a full outdoor Access Point. To do this, you need a wired ethernet connection and power. So I took the PoE (Power over Ethernet) route. That worked for about a year, but, because I didn’t used outdoor grade cat5e cable when I buried it, one day it suddenly stopped working. I think a rat ate it or it just corroded. If you are planning on doing PoE, then you’ll want to follow the detailed how-to instructions provided on the NTCwireless site and BE SURE TO USE outdoor rated Cat5e cable!! If you don’t want to deal with volt meters and ohm’s law, the check out Hyperlink’s PoE solution.

The 8db compact Hyperlink omnidirectional antenna I used has a mast attachment, so I bought a 2” PVC pipe and cap and attached the antenna to that. I only attached one external antenna, so I’m not doing a true diversity system like the Linksys originally had. You can turn off the other antenna or keep it on… your tests may yield different results. Omnidirectional is great if you want to spread the 8db signal over 360 degrees. Sometimes you want to use a directional antenna. Let’s say the park you want to check email at is right across the street, and the the picnic table 30 degrees to the right. You could use a patch antenna and blanket just that area with a full 8db. So instead of an 8db (or whatever) omnidirectional antenna, which spreads that 8db over 360 degrees, you can give a 30 degree spread more of the 8db signal.