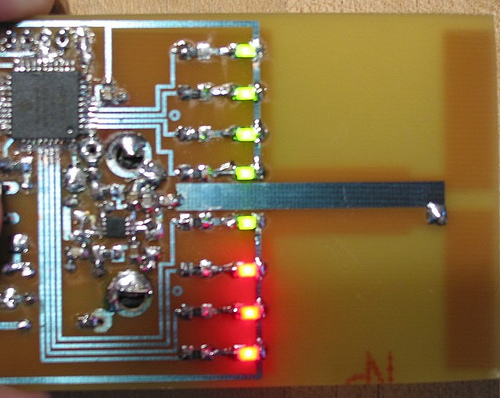 Here is a shot at the result of a hot WiFi signal. The board contains 2.4GHz antenna printed onto the circuit board, an RF logarithmic detector to generate RSSI, a PIC microcontroller and a bank of LEDs to display the signal strength.
The antenna is tuned for the WiFi band at 2.4GHz. The AD8313 is an RF Logarithmic detector that generates a signal from 0.75 to 2v depending on the received signal strength (RSSI) from -70dBm to 0dBm. This gives a very wide dynamic range to pick up both weak and strong signals. The internal ADC in the ‘877 PIC samples the RSSI every 50uS and quantizes the result to eight levels to produce the bargraph display on the bank of surface-mount LEDs.


Wifi Meter Board – this board is about 2.5 by 3.5 inches mainly dictated by the antenna etched onto the board. A flick through Microwave Journal unearthed a 2.4GHz antenna design which I measured and scaled from the ruler they kindly left in the picture. The underside is all groundplane which let me “punch-though” any connection that was to ground to reduce traces as well as reduce stray signals. The battery power was two CR22 cells in a battery holder on the back giving 6 volts to the circuit. I tried 3v but the PIC didn’t boot for some reason.