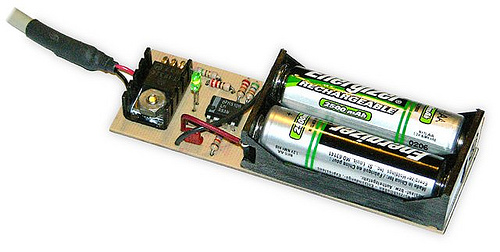 The charger in this project is designed to charge two AA NiMH or NiCd cells of any capacity as long as they are the same at about 470mA. It will charge 700mAh NiCds in about 1.5 hours, 1500mAh NiMHs in about 3.5 hours, and 2500mAh NiMHs in about 5.5 hours. The charger incorporates an automatic charge cut-off circuit based on cell temperature, and the cells can be left in the charger indefinitely after cut-off.
This charger has the following specifications:
Size: 3.8″L x 1.2″W x 0.7″H (9.7cm x 3.0cm x 1.5cm).
Cells: Two AA, NiMH or NiCd
Charging Current: 470mA
Charge Termination Method: Battery Temperature (33°C)
Trickle Current: 10mA
Power Source: Desktop, Laptop, or Hub USB port
Operating Conditions: 15°C to 25°C (59°F to 77°F)


The Circuit The heart of this charger is Z1a, one half of an LM393 dual voltage comparator. The output (pin 1) can be in one of two states, floating or low. While charging, the output is pulled low by an internal transistor, drawing about 5.2mA of current through Q1 and R5. Q1 has a beta of about 90, so about 470mA will flow through into the two AA cells being charged. This will fully charge a pair of 2500mAh cells in just over 5 hours.
During charging, R1, R2, and R4 form a three-way voltage divider which yields about 1.26V at the non-inverting input of Z1a (pin 3, Vref).
TR1 is a thermistor that is in direct contact with the cells being charged. It has a resistance of 10kÙ at 25°C (77°F), which varies inversely with temperature by about 3.7% for every 1C° (1.8F°). R3 and TR1 form a voltage divider whose value is applied to the inverting input (pin 2, Vtmp). At a temperature of 20°C (68°F), TR1 is about 12kÙ, which makes Vtmp about 1.76V.
Once the cells are fully charged, the charge current will literally go to waste, in the form of heat. As the cell temperature rises, TR1’s resistance drops. At 33°C (91°F), the resistance will be about 7.4kÙ, which makes Vtmp about 1.26V, which equals the Vref voltage.