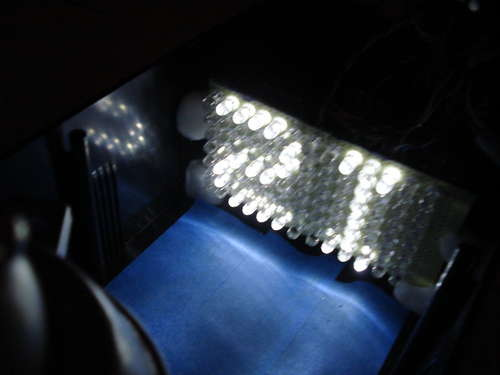 This is based on a 13×7 55,000 mcd white LED array, with a pic micro 16F648, interfaced to a PC with a serial Port. Using cheap page magnifiers(discussed later) for a lens to focus and project each LED to a surface. In the dark I have projected mine on surfaces 15-20 ft while still visible.
Schematics for both the LED array and Control Board are given here.
It would have been best to use a Source Driver to run PORTB but mine is plenty bright without one.The LED array is quite time consuming, but easy enough. Pay close attention to LED polarity, its not easy to get at a single LED once the array is built. In order for the message to project correctly, it should appear backwards & upside down on the array. The lenses correct it to read normaly.
Schematics for both the LED array and Control Board are provided.
For the Programming the LED is arranged in 7 rows by 13 columns. What LEDs are lit in each colum are represented by the variables c0 – c20. The program pre-fills the c variables with the a 8 bit binary number that in sequence will draw the letter or animation. The characters are formatted with an a 8 bit number which is moved to PORTB when the proper column is lit by the shift registers.
Then take a project to put everything altogether.
Finally then it is time for Programming a Message.