How to make a solar iPod or iPhone charger 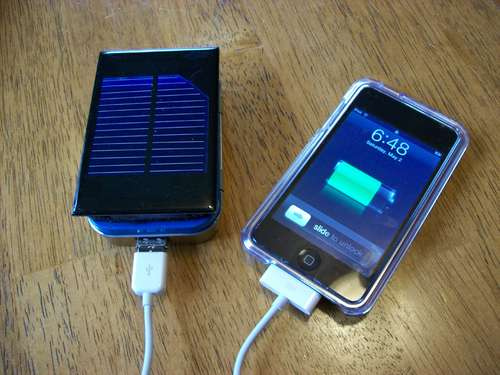 This charger is solar powere.It is smalland has large battery capacity- 3.7v at the rate of 2000mAh. On board the charger charges via solar, USB or wall wart. It accepts input power from 3.7v to 7v.
Tools:
Soldering iron
Scissors
Wire cutters
Pliers (or muiltitool)
Multimeter
Metal shears
Clear packing tape
Materials:
MintyBoost kit
Lithium Polymer battery charger
3.7v 2000mAh Lithium Polymer battery
JST connector/wire
Small solar cell
2″ x 3″ adhesive backed Velcro
Small double sided adhesive squares
Altoids tin
First build the MIntyBoost kit according to its instructions. It’s really easy to assemble- even a complete novice can do it. Instead of connecting the battery holder in the kit, we’re going to solder a JST connector to the MintyBoost PCB. This tiny connector will then allow the MintyBoost circuit to connect to the Lithium Polymer battery charger circuit. Make sure you get the polarity correct! Test the MintyBoost by connecting the battery pack (make sure the battery pack has a charge) and charger circuit. The MintyBoost connects to the connector marked SYS on the charger board and the lithium polymer battery connects to the connector marked GND. Now cut a notch in the Altoids tin for the USB port and use some double sided adhesive to mount the PCB to the Altoids tin. Adding battery and charger
Now cut a notch out of the other side of the Altoids tin to fit the charger and secure the charging circuit to the bottom of the Altoids tin with double sided adhesive. Reconnect the battery and the MintyBoost PCB to the charging circuit. Make sure nothing on the bottom of either one of the circuit boards is touching the bottom of the Altoids tin. Adding solar cell
There are a couple of different ways to connect the solar cell. The first is by simply shortening the connector leads and plugging the barrel plug into the barrel jack on the charging circuit.,br> The second method is to replace the connector with another JST connector and plug it into the third connector marked 5v on the charging circuit. I didn’t have another JST connector handy so I just soldered a salvaged two pronged connector to the charging circuit where there are two open pins on the 5v line.