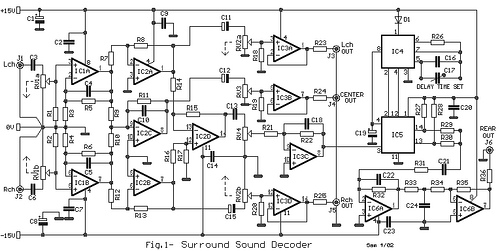 The particular circuit does’t have the requirement to replace the trade decoders Surround, because this they have many more facilities and possibilities. It give however the possibility in many try with this article of decoding. The coding in Stereo Dolby Surround show the tendency to be abandoned and is replaced with digital DTS, Dolby 5.1 etc, that is supported in the digital level of management and transport, sound signal.
In order that appears also in the Fig.2, the stereo sound signal that transport the surround information, is drive for the Lch in the IC1A and Rch in the IC1B, that is input buffer with the next stages. Then follow the stages of summing [ IC2C ], which add up the signals of channels L+R and him drive to the output for central loudspeaker and a differential amplifier [ IC2D ], that rise the difference of phase L-Rch with which is written in the two channels, the information for Rear loudspeakers. The exit of IC2D drive one regulated delay unit of sound to Rear loudspeakers, so that are created the sense of space and her adaptation in the size of our own room. It’s constituted by the IC5, that is a opamp. sound delay signal of 512 stages. The timing of IC5 becomes from the IC4, that is a oscillator. The delay time is regulated by variable capacitor C17. In order to we cut the noise that is produced by this process exist certain filters then, regulated they cut the frequencies above 8KHZ and under 100 HZ roughly, after we behind did ‘t need bigger frequencies bandwidth, to drive the Rear loudspeaker. The Rear information is written with bandwidth of 100HZ until 8KHZ, for this reason Rear loudspeaker has small size. These filters are found round the IC6A/B, that is output buffer, too. In all the outputs exist potesometer that help in the right level regulation of amplifiers and loudspeakers, that follows. Obvious it’s that each exit should drive single power amplifier .The circuit is supplied by symmetric voltage ± 15V.