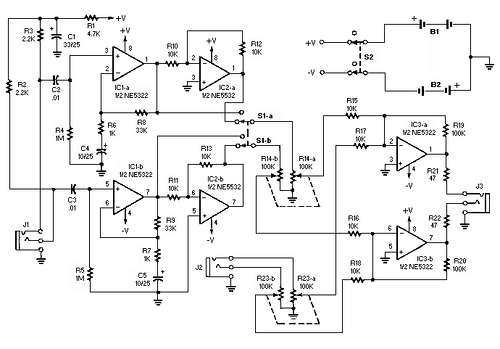 Theory behind this project is that by picking up ambient sound with a microphone and reproducing it out of phase, we can actively cancel or “null” out background noise.


The electronics consist of three op-amp circuits; each built around one half of an NE5532 dual op-amp. Each circuit uses that op-amp in a different configuration. The first circuit is a non-inverting pre-amp, the second is a unity-gain phase-inverter, and the third is an inverting headphone amplifier. Since the Noise-Canceling Headphones is a stereo device, the circuit is actualty two identical circuits side-by-side. Only one channel will be described; the second channel works in exactly the same way.

The schematic diagram shows the design of the electronics portion of the project. A headset-mounted microphone is connected to J1, a 1/8-inch stereo jack. Electret-condenser microphones need a 2- to 10-volt bias voltage for their internal FET pre-amps. That is supplied by R2. A voltage-dividing network, which also decouples the bias volt-age from the power supply, is provided by Rl and Cl. That is necessary due to the high gain of the entire signal chain.

The signals from the microphone then go to ICl-a. an NE5532 set up as a standard non-inverting pre-amp. The gain is set to one plus the ratio of R8/R6 in the feedback path. The total gain for that stage is about 31 dB. Resistor R4 provides a ground reference for the pre-amp. A pair of high-pass filters is formed by C2/R4 and C4/R6. Those filters block any DC that tries to slip through the pre-amp.


Article by Jules Ryckebusch at http://headwize.com