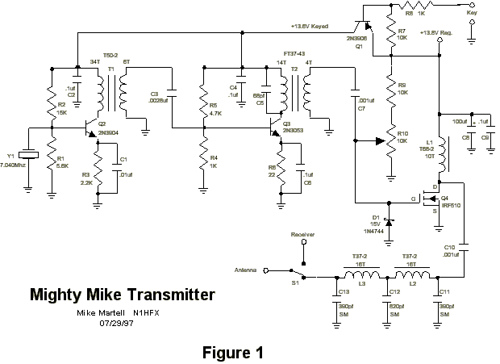 As ham operators, we like to broaden our horizons by trying something new. There is nothing more satisfying about this hobby than building your own transmitter. The circuit in figure is a crystal controlled CW transmitter with at least 5 watts of power.
This circuit is unique in that it uses a power mosfet as a final rather than a conventional bipolar transistor. The advantages are as follows:

a.) Very high gain with almost 90% efficiency. (Only a small heat sink is required.)

b.) Power mosfets do not exhibit thermal runaway as with bipolar devices.

c.) Resistant to high SWR. 30 second key down with no antenna resulted in no damage.


The disadvantages are that a bias voltage is required because the gate threshold voltage can be anywhere between 2 and 4 volts for any power mosfet. This bias must be adjusted for the particular transistor installed in the circuit. In addition, a Zener diode is required to insure that the gate voltage never exceeds 20 volts. This circuit proves that the advantages far outweigh these requirements.

The adjustment of the bias voltage is critical and is adjusted by first turning R10 so that zero volts appears on the gate of Q4. Install an ammeter to the 13.8 volt supply voltage and apply power. At this point the circuit should only be drawing just under 1 milli-amp. Now turn R10 slowly until the ammeter reads about 5 milli-amps. This adjustment should never exceed 10 milli-amps. Turning R10 up too high can cause damage to the power mosfet. Once adjusted, R10’s setting remains the same unless Q4 is replaced.