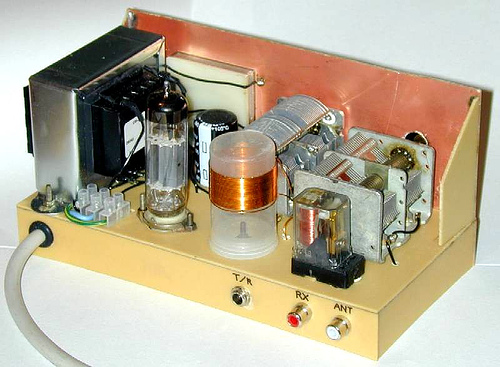 This one-valve (ECL82) CW Transmitter occupies a very special place in my amateur radio history. I was first licensed in 1994 but did not operate on air. I committed to only ever operate equipment which I had made myself.
I had no time for radio construction and several years passed. In early 2002 I came across a design by Jan Axing, SM5GNN and decided to build it. The transmitter worked first time and tuning was exactly as Jan had said it would be. At the same time, I built a solid state HF receiver using various new and unusual techniques such as a Tayloe switching mixer, Huff & Puff stabilised VFO and polyphase audio phase shift network for unwanted sideband cancellation. My first ever QSO was on 25’th March 2002. Over the next few years I made a number of modifications to the transmitter, and it remained my ONLY transmitter for over three and a half years! During this time I made over 550 QSO’s, many of which were long ragchews lasting an hour or two. The little ECL82 valve has served well!