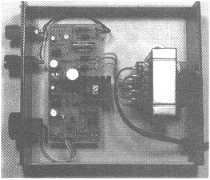 One problem with the smaller PCB drill machines is that the speed drops rapidly as the load increases. This can be overcome to some extent by increasing the supply voltage, however the off-load speed is then too high.
IC1 acts as an oscillator, running at several KHz. The pulses from this briefly turn on TR1, which discharges C4. Between these pulses C4 charges via R5, producing a rough sawtooth waveform.

This sawtooth is connected to one input of a comparator circuit IC3, while the other input is fed from a reference voltage. The output of the comparator controls the switching transistor TR5, via TR3 and TR4.

Thus as the reference voltage is increased, the switching transistor is turned on for a longer period, and the drive to the drill is increased.

VR1 is the front panel speed control, the voltage from which is buffered by TR2, and fed to the reference input of the comparator circuit by VR2.

R15 senses the current flowing in the drill. The peak voltage across this is amplified by IC2, the output from which is also fed to the reference input of the comparator via VR2.

Thus as the load on the drill increases, its current consumption raises, which in turn causes this unit to increase the drive to the drill. VR2 sets the ratio of control to feedback.


FU1 will blow if the drill is stalled for long period, or if the output is short-circuited. Since the circuit can withstand the short circuit current until the fuse blows, a more elaborate over-current circuit is not necessary.

The circuit is assembled on a single sided PCB, 126mm * 56mm. There is nothing out of the ordinary about the PCB construction, the components are fitted in the usual size order.

A small heatsink may be fitted to TR5 if desired. This runs cool in normal operation, but will heat up if the output is short-circuited until the fuse blows.

R15 will run warm in normal operation and should be mounted a few millimetres above the surface of the PCB. The 2 Watt power rating suggested in the parts list should be regarded as a minimum.

The prototype was built in a plastic case, 190mm * 165mm * 68mm, see parts list for details. Check the dimensions of the transformer before buying the case. A suitable overlay for the front panel is shown in fig *, this may be photocopied and fixed to the front panel with clear self-adhesive vinyl.

The internal layout can be seen in the photographs and the interwiring is shown in fig *. No mains fuse or switch were fitted on the prototype for simplicity, however a 3A fuse was fitted in the main’s plug.