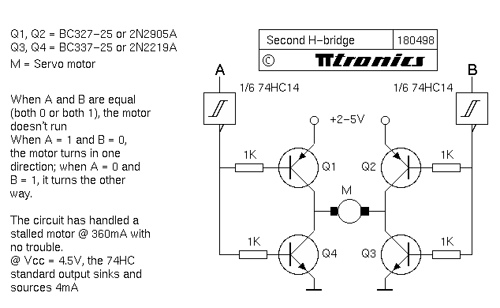 Steve Bolt came up with an interesting smokeless 4-transistor H-bridge variant, i.e. no combination of inputs can cause the bridge to self-destruct.


When I first started tinkering with this circuit, I made the assumption that the inverters pictured in Steve’s diagram were not intrinsic parts of the bridge, but instead were examples of the outputs coming from the driving circuit. This is very, very wrong. If you don’t include inverters (or, at least buffers) on the control inputs, you now have to take great care to avoid having the bridge influence the circuit that’s driving it.

You should bear the following things in mind with this design:

You absolutely must use one bias resistor per transistor; I attempted to simplify the circuit by connecting the respective transistors’ bases (so each pair of transistors could “share” a resistor) — this made for a circuit that was simpler, much easier to freeform, and completely non-functional.

This efficiency of this design is driven by 2 things — the efficiency of the motor it’s driving, and the size of the bias resistors. Just to make life interesting, these things are interrelated (more on this later).

This bridge is “smokeable” — but only if power is supplied to the bridge while the control inputs are allowed to “float” (easy thing to avoid in your circuit design).


Article by Steve Bolt at http://www.solarbotics.net/library/circuits/default.htm