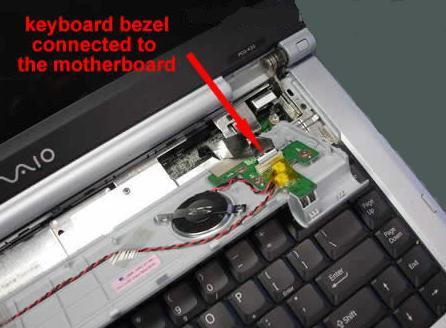 These instructions will help you to remove and replace keyboards on various laptops. I will not be able to cover all models but you will get the idea. Steps for removing and replacing the keyboard are similar for most laptops.
Sony laptop

Carefully move the connector lock 2-3 millimeters up and after that pull the keyboard cable. To install the keyboard, follow the above mentioned steps in the reverse order.

The keyboard removal instructions will be almost the same for most modern Toshiba laptops.


The keyboard bezel removal procedure is similar to the above mentioned Sony Vaio laptop. Lift it up with a small screwdriver and remove using fingers. On most Toshiba laptops the keyboard bezel doesn’t have any circuit board underneath, it is just a piece of plastic and you do not have to worry about cables.

Before you remove the keyboard, you’ll have to open the connector and release the flat ribbon cable.