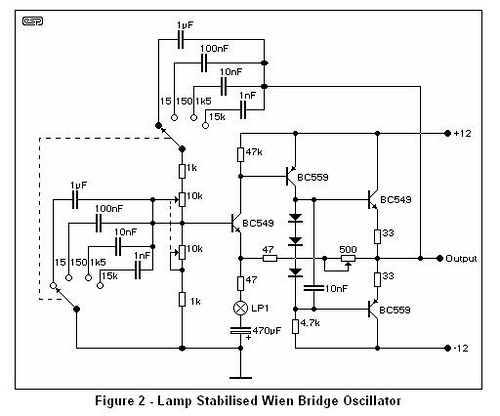 As a piece of test equipment, an audio oscillator has to be considered essential for anyone working in with hi-fi gear. Together with an audio millivoltmeter, and even better if you have access to an oscilloscope, you will be able to make proper measurements on everything from preamps, RIAA equalisation stages, tone controls, crossover networks,etc.
Design Considerations
Normally when I design something, I try to stay away from hard-to-get parts, because if they are hard for me to get, they will probably be a lot harder for many of my readers.
This poses a problem with this project, because one of the essential items is a rather obscure thermistor. This is used in the gain stabilisation circuit, and as this is an absolute requirement for a sine-wave oscillator, poses something of a problem.
As a result, I was going to show three different ways to achieve (more or less) the same performance. Since there has been no request for the LDR stabilised version, it is on permanent hold. Of the two remaining, at least one is sure to be available, so no-one should be unable to build the unit. In this first version of the project, I will show the preferred option using the lamp stabilised circuit.
As with the audio millivoltmeter, it is not possible to use a standard opamp for the oscillator, because of the frequency response needed. A different variation of a discrete opamp is used for this design, using commonly available bipolar transistors.
Note that calibration of an oscillator is never easy if you do not have access to a frequency counter.
Basic Principles
An oscillator is simply an amplifier whose positive feedback is greater than the negative feedback, resulting in a signal which is amplified over and over again (by the same amplifier) until the output can increase no further.
This generally results in a square wave if the frequency of oscillation is low enough relative to the amplifier’s bandwidth. There are several things that must be done in order to create a usable audio oscillator:
The frequency must be defined with a suitable filter, so the output will be at a known frequency
The gain must be stabilised to exactly that value which will sustain oscillation, without dying away or becoming a square wave (or just distorting)
The frequency response of the amplifier should be considerably greater than the highest frequency to be generated to ensure amplitude stability at all frequencies
Output impedance must be low enough to ensure that there is no significant loading from the input circuitry of any expected load
An output attenuator is needed so that a defined level can be preset, preferably without having to measure it before use
Ideally, a square wave output should also be provided – this is only really useful if the user has access to an oscilloscope
The choice of filter circuit is discussed below, as is the stabilisation process.
The design presented will provide sine wave signals of typically less than 0.1% distortion from 15Hz to 150kHz, in four overlapping ranges. An optional square wave generator is also shown, and may be included if you have a use for it.
The oscillator is designed to operate using the AC “plug-pack” power supply described in Project 05, since this is simple and safe. The output level is adjustable in 20dB steps, from a maximum of +10dBV down to -50dBV in 4 ranges as shown in Table 1, with a variable control to enable any desired voltage from 0V up to the maximum.