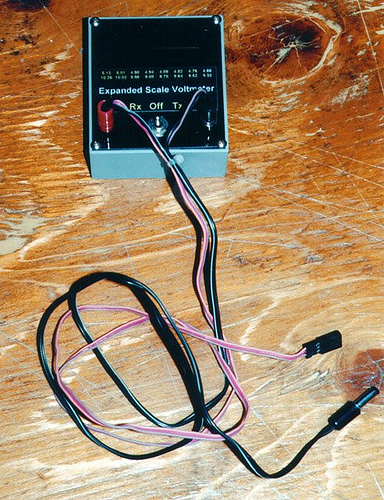 An expanded scale voltmeter that is ESV acts like a magnifying glass on part of the scale of an ordinary meter, namely the part of the scale we are interested in.Secondly, and ESV applies a known load to the cells while testing them. Only by testing them while they are doing a known amount of work can one accurately get an estimate of their state of charge
Instead of an analog meter movement or a digital display, the ESV described in this article uses a bar graph display consisting of eight LEDs. If no LEDs are lit, the NiCd battery being tested is dead. If all the LEDs are lit, it is close to fully charged.
A switch selects the number of cells being tested, either four for receiver batteries, or eight for transmitter batteries. The vast majority of receiver and transmitter batteries consist of AA cells, and this ESV is calibrated for those types of cells (larger, lower-resistance cells will show a higher voltage for a given load than will the smaller cells).


Construction
Printed circuit pattern. Actual size is 2.6″ x 2.1″.You could build the ESV on a general purpose circuit board, or even a perforated board using point-to-point wiring.
Start by installing wire jumpers J1 and J2. Select resistors for R1a through R2d. Either use 1% tolerance resistors, or hand pick from a larger selection of 5% resistors to find those closest to 100Ù. What is most important is that the combined parallel resistance of R1a through R1d be equal to that of R2a through R2b