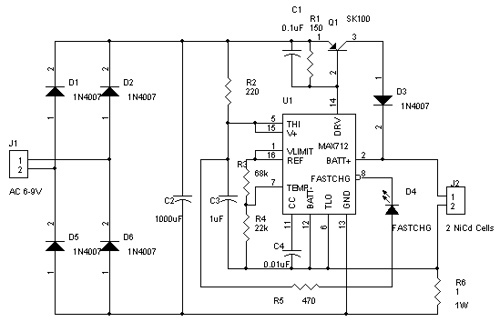 An advanced battery charger design based on Maxim’s battery charger IC MAX712. This device can fast-charge an NiCd/NiMH rechargeable battery.
This circuit is from the MAX712 Datasheet, and makes use of the ÄV/Ät and timeout methods to terminate Fast Charging. It is designed to charge two NiCd pencil (AA) batteries, at 300mA. After fastcharge is completed, Trickle charging begins, at 15mA.

Design equations for various circuit elements in the standard application circuits are given in the MAX712 datasheet. These have been used to calculate the values for various components. The indicated power transistor is a 2N6109, which was not available locally. I used an SK100 transistor instead. It works fine, except that since it is in a TO-92 metal-can case, heatsinking is inadequate for supply voltages higher than around 7V.


Construction of the circuit posed few problems, except for high-frequency oscillations observed on the power lines. This was before I had constructed the bridge rectifier stage, and was drawing power from a bench supply through a long wire. It proved very difficult to kill these oscillations (at 1MHz), but a few 0.1ìF capacitors did the trick. This is mentioned in case you build the charger without a built-in rectifier. AC power is obtained from a modem power supply transformer. The whole circuit was assembled onto veroboard. Connectors for the AC jack were inserted after cutting three holes in the circuit board, and using large amounts of solder to hold it in place.